New to the forum? Tell us a bit about yourself here

Cannot belive its been 20 months of inactivity by myself.
Puting a plan together to get this 820i back on the road.
1. Replace Fuel Pump and Clean Tank. Replace Fuel Relay. Replace Filler Cap.
However, need to remove the original pump to check serial number for replacement from:-

As there seems to be slight variation in the 1993 pumps.

As my problems seem to be a fuel problem on a 27 year old car with only 42K miles clocked. Had been toying with the idea of Carbon Engine Clean. (Lots of Mobile Specialists)

Anybody advise on this ?

Then get an MOT and hopfully some touring /shows to hopefully meet some of you guys.

Firstly, i wouldn't bother with that carbon cleaning, it doesn't appear to be a well-defined procedure by any stretch of the imagination.

Secondly, try one of these fuel pumps :

I'm curious to know why you want to replace the pump - has it failed?
Cheers,
Dave

Hi Dave.
Having been through the process of various parts being changed:-
ECU
Fuel Filter
Stepping Motor
Distribution Head and Plugs.
Plus a few other things like reseals on the engine block.

The problem had got more persistant from only cutting out once in a blue moon and then working for quite a while. To now cutting out multiple times.
Its not electrical as there seems to be no intruption and ignition tries to kick in straight away. It is also taking very much longer to re start it. From straight away to up to 30 minutes which doesnt help the battery.
Having spoke with a few people the fuel pump/fuel pump filter has been indicated due to its lack of mileage.
I think you also on this post detailed the methytlaled spirit option in the fuel tank. Not done as felt it was over my techincal ability and comfort zone.
Also been told that I should change the fuel injectors, as 1993 was a bit of confusion in Rover
My problem is that in Bridport I am a bit out of contact with decent mechanics whom could put this right.
As previously posted, no family member will get in the car due to the tight country roads here and a previous cut out at a very dangerous location. Hence 20 months and no action.
Mike
Bridport ~ British West Dorset
Rover 820i
MG-ZS
Rover 416 Tourer
Top

regarding your list of things you've changed so far :

Having been through the process of various parts being changed:-
ECU - might cause it but doubtful.
Fuel Filter - ditto above
Stepping Motor - ditto above but only when idling
Distribution Head and Plugs. - ditto above
Plus a few other things like reseals on the engine block.

Do you know if the fusebox has ever been resoldered?


I think you also on this post detailed the methytlaled spirit option in the fuel tank. Not done as felt it was over my techincal ability and comfort zone.
Also been told that I should change the fuel injectors, as 1993 was a bit of confusion in Rover

Who told you to change the injectors? It would either not run at all or always run rough but not cut out randomly.

As for the meths treatment, this is going to sound sarcastic but genuinely isn't meant that way - you know how to put petrol in from a fuel can don't you?

Simply buy 2L of meths from Toolstation (they're the best price for the quantity), add it to a fuel can, if the tank is near empty as in "feed me" light on, add 1/2 gallon of petrol and add it all to the tank.
Start the car and run it for a while (no MoT i understand at present?) or take it for a drive. For the sale of a tenner (meths and a couple of litres of petrol in a can) it has to be worth a try and will eliminate condensation which is the most likely cause if it's low mileage, especially with lack of use allowing time for more condensation to build up.

I need to give my Sterling the meths treatment too, i've not really used it much this year so far thanks to firstly catching a snot-goblin (during a heart scan at Papworth no less!) that lasted 10 weeks and then putting my back out for 2 weeks.

After that, it will get the ATF in the tank treatment too - synthetic ATF (I use Carlube ATF-U as that's what i use in the gearboxes on both my beasts, primarily because the Sterling needs it but it's better for the box in my other beast too) but only an egg-cup full for half a tank, heavy duty cleaning 2 egg-cups in half a tank of petrol, same method to add it, in the fuel can, add petrol, shake then add to the tank and drive.
It will clean and revive the seals in the injectors and lube the fuel pump too.

Another thing to check is the inertia switch under the bonnet. 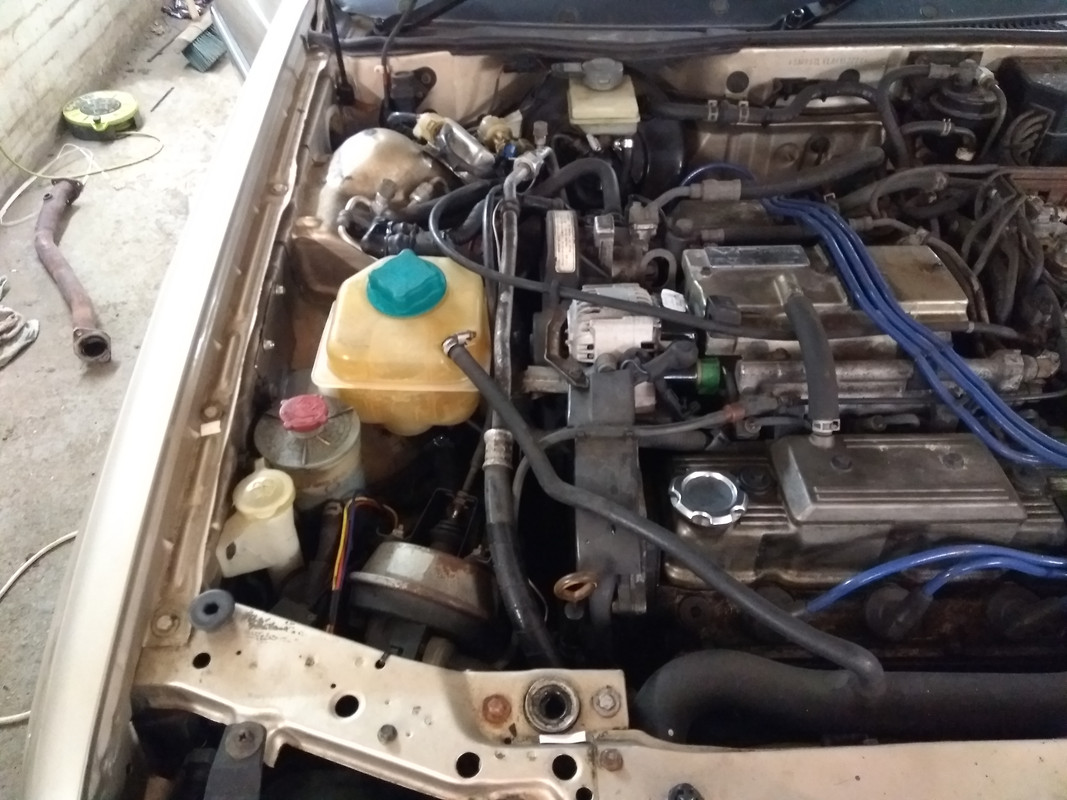 If you look at that picture, on the bulkhead to the left as you view it of the brake master cylinder and reservoir is a black rubber-mushroom headed device. Use the hand of a large screwdriver to tap the body of the device until it deploys which you will know as it will make a "ba-doy-nnng" sound and a click.

Reset it by pressing the rubber-mushroom head downwards in the centre until you hear and feel a click. This cleans the contacts which just happen to feed the relay coil for the fuel pump. There is a secondary function in that it should unlock the doors when deployed. However this function can not be taken to indicate it's not passing enough current for the fuel pump relay as it still passes enough current to tell the CCU it's still set.

Not being funny but so far it seems as if you've listened to many other people and changed a lot of other things and are still no further forward. On that basis alone, my ideas are much cheaper and much more likely to fix the problem so are definitely worth a try. If nothing else they will eliminate a few basic trouble causes and improve the general running of the engine.
Cheers,
Dave

Cheers Dave. For taking the time to reply
Wil invest in some Spirits and add to the Tank and give it a go.

I seem to remember giving the mushroom head a bang with a flat head to get a 'Booging Sound'.
Your quite right I have listerned to too many people and had it into 3-4 diffrent garages to solve this problem. All giving different advice while taking my £ notes.
ECU was changed by an old Rover Garage whom thought it had an error message. I still have the original. They even had it up on the ramp for an MOT when it cut out.

I have also added ATF in the past.

How long had it been idling on the MoT ramp for Mike, about 10-15 minutes?

They should have been able to clear the error code if they could read it then trty again in case it was a historical code.
Got a similar one over on the Volvo forum at the moment and i've explained to the guy that he heeds to read then codes then clear them and take it for a drive and see if it happens again then read them again.

It's SOP with ECUs that retain fault codes, read then clear the codes then test drive to see if the fault reccurs. If so, read them again and compare.

With any fault, always start with the obvious and what makes most sense. In your case, it's condensation in the fuel tank. While driving, it's shaken around so the water moves away from the pump pick-up so it isn't so bad. When you are slowing down or have stopped, the water/condensation then settles at the lowest point again, in other words the fuel pick-up point. That makes it cut out, difficult to start and hesitant for the first while after it does eventually start.

That will prove it's fuel and also by actually getting it running, the fuel return from the injection system will help to splash the water around.
Cheers,
Dave

Cheers Dave.
The MOT ramp episode was about three years ago.
Then had the problem of not having the right gear to read/locate the faults.
In fact I still have a piece of black tape over the dashborad warning light in order to get it through the last test as nobody seemed to have the kit to clear the light. Which I think was only because of the battery being disconnected.

Would you recommend any of the test meters that seem to be all over the internet/eBay?
Mike
Bridport ~ British West Dorset
Rover 820i
MG-ZS
Rover 416 Tourer
Top

Which test meters do you mean Mike? If it's the OBD ones, no point at all as you won't have the socket to plug them in on a 1994 car.

Something i have just thought of that may be a problem is the rubber insulator between the inlet manifold and throttle body, these sometimes fail causing an air leak. If you start the car and let it idle then grab the throttle body and try to wiggle it, if the car cuts out, chances are that's the fault. Still give the meths a try though to avoid any false results.
Cheers,
Dave

Even better if you can get a photo of it!

Hi Dave. Just saw your message.
Thanks for messaging.
Unfortunately, up in the North West with this 'self isolation' shut down scare at the moment.
820 is parked up in Bridport.
Hope to get back soon and will remove the dash board to have a look. Or, will send an image of the tape which has a glimmer of light at the edge. From the postion should be able to work out the illuminated symbol.
Regards and Stay Safe.
Mike
Mike
Bridport ~ British West Dorset
Rover 820i
MG-ZS
Rover 416 Tourer
Top

Sorry Dave.
Not possible I am in the North West of England and the car is still in Dorset.
Hoping to get back next week.....but in this crazy time, not too sure.

As soon as I can get to the car I will upload an image.
Best regards and Stay Safe.

Sorry Mike, i thought you had the image on whatever device you're using to post on here. Guess we'll both have to be patient until you repatriate yourself to the correct part of the country!

Users browsing this forum: No registered users and 2 guests