Another car on the drive

Another car on the drive

After lots of thinking and changing my mind we've picked up this.

Because my other halfs hours have changed it means we can now no longer share the Astra day to day.

I've been using the Jeep as mentioned elsewhere but it's really not a good daily car and is spoiling my love for it.

So after considering alsorts of other cars a mate suggested why not get something for 'er indoors as that might be easier.

It was to an extent, Corsas are available by the thousand but as ever when I start to look for a car the exact version is always the rare one.

It's not a VXR or anything daft but 98% of the ones for sale are all aimed at MPG nuts which I'm not.

It's a 1.4SE Turbo which has 100BHP so it's nippy but not actually fast as such. Most of the others are 75 or 89BHP which can add up to 6 seconds to the 0-60 time. Which is not actually that important to her but gives a good indication of how capable it will be in modern traffic.

It's full of gadgets, heated seats, steering wheel, front screen, cruise all that kind of thing. Well spec'd for a little car.

The last picture shows it with the Astra and caravan as by freak chance it happened to be for sale 6 miles away from where we were staying in York for the last few days.

That never happens when I'm looking for a car!

Jeep for fun, Astra for daily, Corsa for the missus?
Cheers,
Dave

Something like that, till I change my mind again anyway.

Fair enough - how's that ARB doing on the Jeep by the way?
Cheers,
Dave

It's made a massive difference but it's still not a truly pleasant experience driving it on the undulating back roads I need to use for work.

Road holding at speed is far better than before. Much above 70 and you could start to feel the car becoming unstable. Up to *** ish and it's now exactly as you'd hope. Very planted and feels far safer.
Chris
19 Vauxhall Astra 1.6T SRi Nav Estate
08 Vauxhall Astra 2.0T Design Twintop
02 Jeep Grand Cherokee Overland 4.7 V8 HO

Maybe you need stiffer rear springs as well Chris? or a different route to work?

Glad to hear it improved other areas though! Just fitted a rear ARB to my Volvo, that feels much more planted and even emerging from T-junctions is more pleasant with much less body roll!

The guys in the know say while the ride can be improved it will never be like a car with independent suspension.

I've decided I'm not chasing it and spending to get nowhere. Then ultimately resenting it. Been there before.

The route to work is impossible to improve without doing a huge detour of an extra 15 miles or so.

I've decided I'm not chasing it and spending to get nowhere. Then ultimately resenting it. Been there before.

The route to work is impossible to improve without doing a huge detour of an extra 15 miles or so.

It didn't already have an ARB then? Or it had previously been removed?

No rear ARB from the factory Chris. Nice easy job to fit, once the wheels were off and the lower arms supported, about 4 nuts each side to undo/do up after fitting and job done. 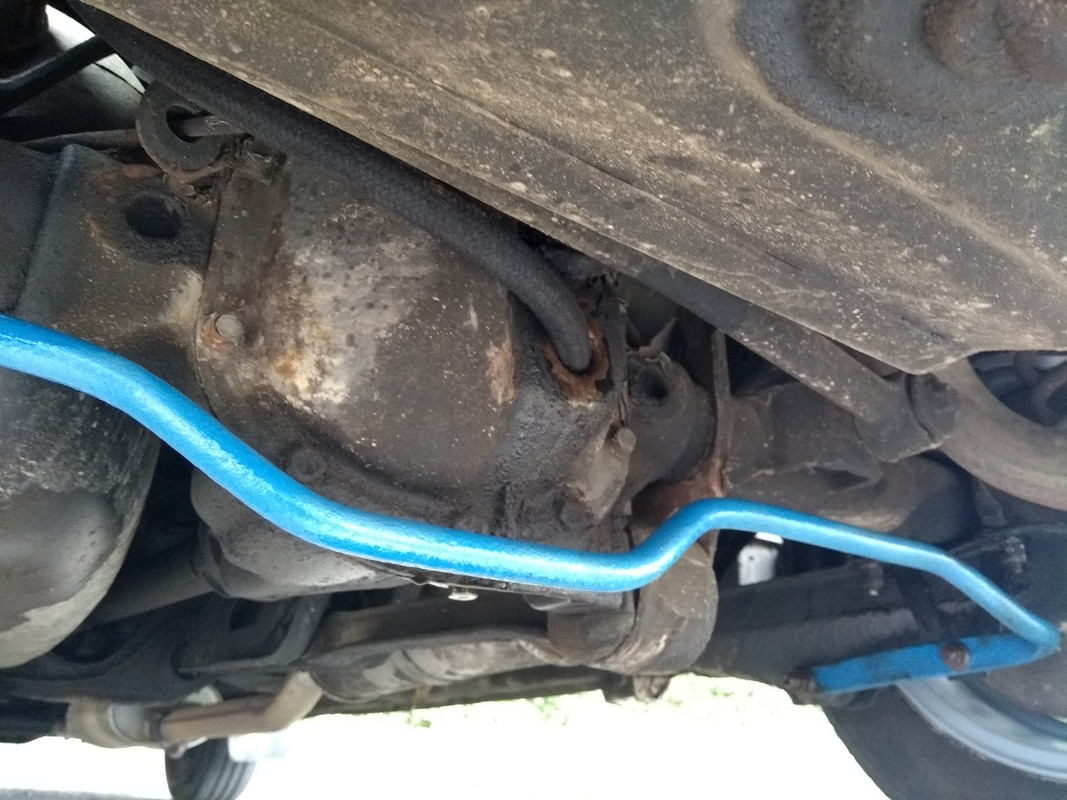 Strangely they did fit them as standard from about 93-94 time on the 940s and i just happened to know of someone breaking one.

Is your Jeep a live rear axle with leaf springs?
Cheers,
Dave

Definitely built for wafting then if it had no ARB at all.

At the time it was made, the only 7xx series that had a rear ARB was the 740 Turbo, even the 760 Turbo didn't although it had IRS and stiffer springs and shocks, it could easily be said it was built more for wafting.

The original set-up on mine was Nivos and long, weak rear springs (long enough to reach the floor when the car is jacked just high enough to change a rear wheel! Or very close at least!

) and the Nivos were leaking, the self-leveling didn't even work anywhere near as it should (not that it truly self-leveled, it only restored ride height to 30mm below normal at best when laden) and the ride was akin to being on the Herald of Free Enterprises last voyage.

Later models of the 9xx from about 1993 on had a rear ARB as standard. I got mine from someone breaking a 95 940 as well as a few other parts including a replacement fuel filler neck.

The reason i asked about your rear suspension set-up on the Jeep, on my XJ Cherokee, it was leaf springs and a popular mod was to fit the HD springs from the diesel models as the rear springs on the petrol XJs were a known weak spot. I'm not sure if there's a work-around with parts from other models for yours (WK i think), might be worth asking on a forum or two, i used birtydastards.com (yes, it is called that!) and learned a fair few tihngs.
Cheers,
Dave

Now the Corsa is here there's no need for me to investigate further. If it's not being used much as before I can accept it's faults.

I've only used it once since getting back from York last week.

See how long it lasts before something ruins this plan.

There speaks a realist!

For my news on rear ARBs, took the Volvo on a bit of a trip yesterday to collect some spare wheels for the Sterling and as (by some coincidence) the place i collected them from wasn't far from where i got the car from, i can make a good comparison on how it handles now compared to then.

Like two different cars! Ignoring the FUBAR Nivos and weak springs all round, the ride is vastly improved with the rear ARB - factor in new springs and shocks all round and the rear ARB, totally different! Much more stable/planted and comfortable too.

The ghost of the Herald of Free Enterprise has been well and truly exorcised!

New plan, the Corsa has gone. 'er indoors decided she didn't like it after using it for work. So we've sold it.

Now trying to find another Astra.

Back to the Jeep - it's worth remembering that the front ARB can make a big difference to how the rear behaves.

The well regarded Ron Hopkinson MGB handling kit added a rear ARB (one was fitted as standard on the coil-sprung front end but not the leaf-sprung live rear axle) and it transformed the car.

However, the MGC only got a beefed up front ARB (very beefed up) plus a conversion from lever arm dampers to tubular ones on the rear. The logic was that the front tended to lean out on corner, causing the rear to lean to and thus forcing the inside rear wheel to lift and lose traction. The very heavy duty front ARB keeps the front end much more flat and that means that the rear stays flat and maintains contact - and it really works, as I know from 25 years experience on my MGC GT.

This was all because the tall, heavy, straight 6 in the MGC gives it a higher centre of gravity than the MGB and it tends to lean more. Stop the lean and the rear stays better planted. I wonder if a bigger front ARB on the Jeep might be/have been the best option
Out in the desert with a 1998 Grand Cherokee V8 and 1996 Grand Cherokee 4L. Back home: 1969 MGC GT
Top

My 760 estate used similar logic Richard, no rear ARB but a hefty front one. Adding the "Handling Pack" rear ARB (later the standard fit rear ARB on 9xx models from 1993) transformed the handling to nearly flat through corners - not 800 with 26/21 F/R ARBs flat but much closer to that than the ghost of the Herald of Free Enterprise!

Getting rid of the (leaky) OE fit Nivos (that never worked even when new, the proof is in Boges own literature!) also improed things immensely as well as new front shocks and springs all round plus many worn suspension bushes were renewed.

I can see the logic of Chris doing the rear ARB first on the Jeep, the fronts tend to feel tighter on normal driving.
That said, if the heavier rear ARB hasn't improved matters, a heavier front would definitely be a good idea.