820Vitesse wrote: ↑
Fri Feb 15, 2019 11:08 am
It started leaking from the seal between the pump housing and block.
So next job is to replace the seal and most likely fit a new cam belt at the same time.

That seems to be a common fail point on the T-Series, my old 420GSi leaked there too - not out but in! In other words, it drew air in which caused air-locks and sneakily emptied the cooling system resulting in HGF and the head had already been skimmed within a micron of its life.

I'd suggest when you fit the new seal, a smear of silicone grease (or red rubber grease) on the seal and also dress the block/pump housing with emery paper to remove any oxidisation so it's as near perfectly smooth as you can get it. This will all help the seal find its water-tight position by allowing it to move very slightly under its own rubbery properties.

You probably knew this already but it might help someone else with a similar problem.

Thanks Dave, I went out to the car this morning prepared to pull it apart, only to find the leak had stopped, more thorough track of the leak led up to the thermostat housing top hose, nipped it up and a few more that I fitted new hose clips to, topped it up and it is ok, no leaks. I jumped to conclusions because that is where it leaked from last time I got it back on the road after years of inactivity.
The new hose clips are too strong as in they do not stay round when tightened up, these will all be changed again before it goes back on the road.
So cranked it over with spark plugs removed to get oil pressure up, put plugs back in and after a lot more cranking it fired up, apart from plenty of vibration, it is on stands and the exhaust is touching the rear lower suspension arm, plus the solid engine mount the exhaust was not much louder than before and sounds really nice, I ran it no more that 2000rpm just to be neighbour friendly but over all really pleased
http://www.rovervitesse.com
Top

That's pretty good news Jim and i'd argue the new clips aren't strong enough if they're deforming from being round to something else. Depends which way you look at it really!

I wonder how loud the exhaust will become when you are giving it the beans and are loading the engine up rather than just a fast tickover?
Cheers,
Dave

Soo glad it fired up.

Was thinking about your car at the weekend as i did a near 600 mile trip in my car:

Have you chanegd any of the rear suspension rubbers? If so, what did you use? Really want to change all the rubbers and bushes on my car(s)
Phil B
95 827 Stirling: Nightfire Saloon.
96 Coupé 827 Manual White Gold.
97 Coupé 820 Vitesse Gunmetal.
99 820 Vitesse Nightfire Fastback. SERIOUS amount of welding done. Lived in a fettid garage for years.
EX 1994 Saloon Rover 827 SLi White Gold- RIP.
Top

Thanks Dave, Phil, it was good to have it running again even though there are still lots of jobs to finish before it can be driven, it seemed a significant step after 2 years with it in bits again.
600 miles is a fair old drive, used to love long drives in mine when it was a normal car. My rear suspension is a mix of various Powerflex black bushes most of them cut to fit, I still have a list of the bushes used but need to spend some time going through what went where and what was done to get them to fit.

Dave the hose clips are made from a heavier gauge metal, they are sold as 30 - 55mm or something but when you wind them open or closed from the position they are sold at they end up an odd shape, normally as you tighten clips they pull back into a round shape as they grip the hose and pipe, these being heavier gauge have to be tightened so much to pull back into shape they pinch the hose and still are not fully round, I replaced the ones in awkward places at the weekend and left the easier ones to see if they will be ok over time.
Just waiting for a short straight for the tailpipe then the exhaust is ready to check for ground clearance. I will update soon
Jim
http://www.rovervitesse.com
Top

Got what you mean by the clips now Jim - got an idea for you as well.

Before fitting them to the hoses, fit them on the stub the hose is going on. This will be in the region of 10-12mm smaller in diameter than the hose but if you use it as a former for the hose clip, the clip will naturally spring out a bit when loosened. This should get you near enough to a perfect circle on the hoses.

Might be worth a go, then when you tighten them on the hoses they should do what they're really meant to!

Cheers Dave, good idea, Ill give that a try if I use them again.

Phil, yes they are the hardest but they do all the bushes in other colour/softer versions
http://www.rovervitesse.com
Top

I was going to use the Rover boost control solenoid wired to the DTA but to speed things up went for a DTA recommended valve, this is wired in and ready for setting up/mapping once the car is mobile

With the side brackets in place I am able to start on the cross bar. The original plan was it would be just one piece bolted directly to the brackets but it either had to bolt on top which looked wrong or bolted with a tag inside the bar which meant one of the brackets had to be removed with the bar to work on the engine.
So the bar bolts to plates that bolt to the brackets, more bolts and more complicated than I wanted but it will be quick and easy to remove.

That is where it is up to today,

More amazing work JIm - my mind is getting blown with all the great stuff you're doing, i want you to keep it up so i can see the end result but not sure how much more my poor brain cell can take!

Seriously though, you must have a serious plan of action and eternal enthusiasm to finish it!

Blimey thanks Dave. I doubt it will ever be finished, I have lots of ideas but have to stop myself starting anything new to get it back on the road this summer.
I did get a bit more done today, the plate for the other side is made and fitted and tidied up a few edges. Just waiting for a bit of T section ally to go on the bulkhead then I can make two more smaller bars from the bulkhead to top mounts.

I don't think any car is ever truly finished Jim, you're certainly going to have one of the most unique and best put together cars though!

This was never going to be right fixed solid one end

So cut it and another spare in half and welded the two smaller ends together doing away with the big flexible bush, could have saved myself a lot of work and the yellow bushes if I had done this from the start but there you go live and learn

Welded together and painted silver (ran out of black)

Started polishing the brace bar, should look ok when finished

Nice work on the dog-bone Jim - have you reinforced the bulkhead around the bracket area? (Think i might have asked that before!)

For road cars there is meant to be some play in the large bush and in fact, some models (2.7 auto) have a bush in the large end that looks like it's been chewed by a dog.

Like the polishing on the strut brace, in fact i've been doing a bit of polishing lately myself : 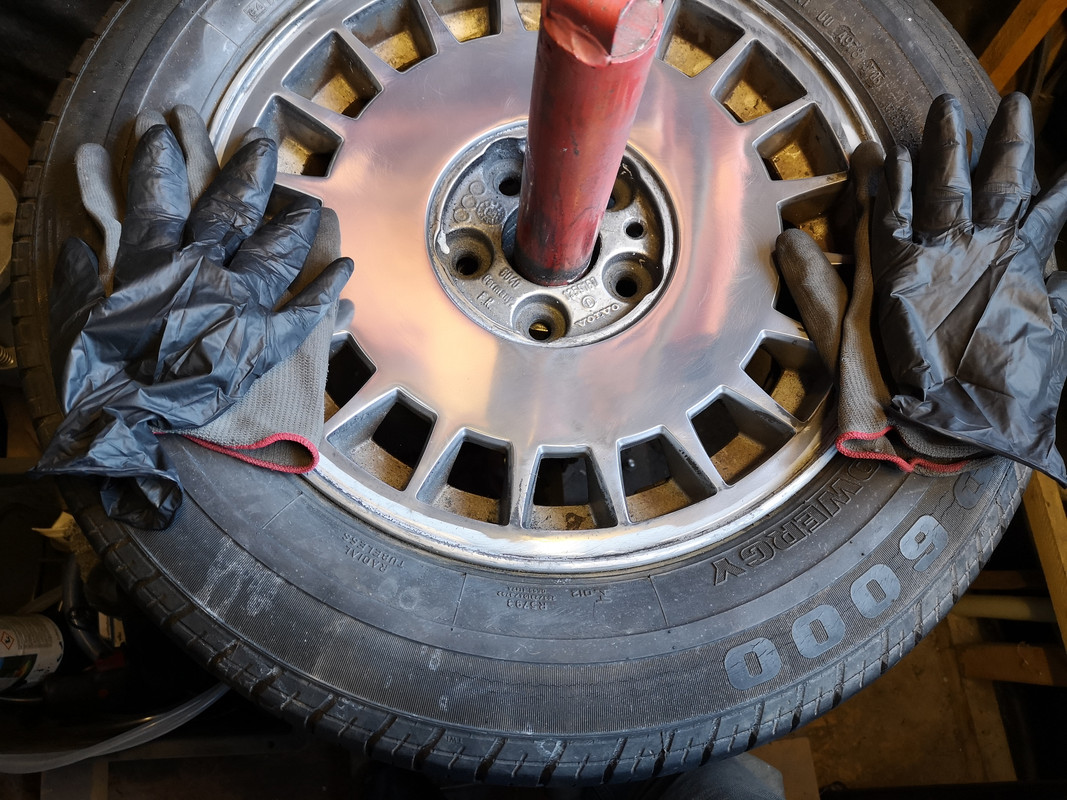 A long way off being finished and in fact, i've had to start again due to accidentally putting a scratch right across the most highly polished bit!

That said, i'm fitting a replacement tyre (only a cheapy, part-worn thing as it's the spare) so it would have probably got scratched sooner or later.

At least if it gets scratched now i can sort it before it gets near the car.

I think the bulkhead will be ok, loads will only be slightly more if anything it will be less because there is no freeplay now, it cannot jolt backwards and forwards as with the old bush but as always I take nothing for granted and will keep an eye on it.

The wheel looks great, what about the centre cap, is it aluminium too?
http://www.rovervitesse.com
Top
Post Reply [phpBB Debug] PHP Warning: in file [ROOT]/vendor/twig/twig/lib/Twig/Extension/Core.php on line 1266: count(): Parameter must be an array or an object that implements Countable