As long as the engine can't rock too much on the main engine mounts you should be ok on the bulkhead but as you rightly say, take nothing for granted Jim!

Thanks, the centre cap is in fact plastic and i've had a couple of nasty surprises as i've continued with the clean-up/polishing.
Not only was the wheel originally rough-cast with 3 coats of primer (etch, filler and normal), 2 coats of colour and at least 1 if not 2 coats of clear and then baked on (enamel baked at 140C!

) but they used some other filler in a couple of gouge marks on one of the spokes before painting it.
The gouge marks are deep (3mm+) so have no chance of polishing out and there are a couple of areas (admittedly very small but very noticeable) where the primer still refuses to shift, even after sandblasting, a rotary wire wheel in the drill, a small screwdriver used as a scraper and a few other methods.

That means even if i do get rid of those last traces of primer, i've still got this to deal with : 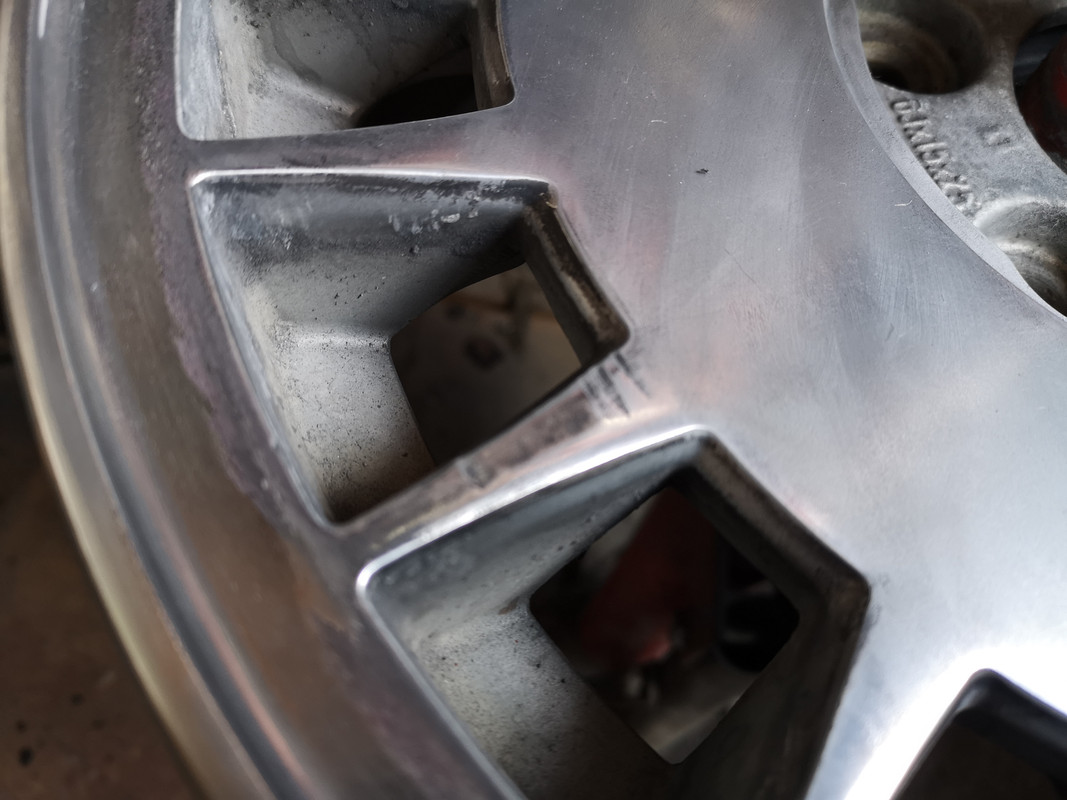 Only thing i can think of is fill and paint it which defeats the object of polishing the front face of the wheel.

I'm glad it's only the spare, i have a sneaking suspicion i'll find similar on the other wheels so might just alter my plans and paint them. Jury is still out at the moment!

Decisions decisions, if you paint it then you will have to paint all of them, but if it is only the spare then those scratches on the spokes are fine, a lot of work otherwise.

I got the final parts to the strut brace finished. The two smaller bars are not so effective until I brace the bulkhead but I want to get the car on the road rather than start another long job. I need to rub down the scuttle panel it has started to rust from the back without any signs on the outside, I had no idea until removed it to cut the plastic grill.

After fixing the scuttle panel I need to finish the air filter box, some wiring and hoses to make and it is getting close to MOT time.
http://www.rovervitesse.com
Top

I've decided to fill the gouges and paint the wheel Jim - as it was a random choice out of the 5 wheels to strip and refurb and i found these gouges after removing the original paint, it doesn't bode well for the others - took me long enough to get to this point and if the others are in a similar state then it's just too much work.

Liking those strut brace bars, the two smaller ones are probably bracing the bulkhead/scuttle which will reduce scuttle shake on some corners i would think. I suspect you've already braced things more than you realise there and unless you go for serious reinforcing of the bulkhead, won't improve things any further, even then it would probably only be minor - a lot more work for a little gain.

Scuttle panels always seem to rust from the inside out, i've known a few that look perfect until you lift them off then find the only thing holding them together is the paint on the outside!

Good luck for the MoT, should fly through!

The scuttle panel sits tight on the plastic grills and over time with heat, body flex, vibration and whatever else could cause them to move it slowly rubs the paint off then the rust moves in. I might try and add a pad or a blob of grease when it goes back on.
http://www.rovervitesse.com
Top

How about some thin draught excluder tape Jim? If you can find some closed-cell variety in black it would be almost invisible as well.
Cheers,
Dave

Ill probably just go with a blob of grease at the points it touches the plastic grill panels, any tape or pads will push it out of shape. It was a good job this had to be removed for access for something else. It looked fine from the front, (scratches are from resting on bench while rubbing down reverse side)

I want to know what glue they used at Cowley, it took half an hour to remove the rubber edging with a razor blade, rubber was hiding the worst rust.

I was lucky to catch this now, another year and it would have come through

Good work there Jim, i think i would have gone down the electrolytic de-rusting route which would have converted the rust back to metal and also added a very thin coating of steel to it.

It would also have released that glue! Given the rubber seal is now 20+ years old, it might pay to find a similar seal to refit to the scuttle panel and if it doesn't come pre-glued, i would suggest Evo-Stik (or Evil-Stick as i call it!) as that is what i suspect was originally used although it may even have been some form of superglue.

Are you going for satin or matt black when you paint it or BRG to match the car?

Just a thought on the tape idea - a simple length of black insulation tape will provide protection and a surface that slides easily to accommodate the vibration, so thin it won't push anything out of shape either!

I need to get this done as soon as possible so although that method looks very effective I will have to stick with the old fashioned way on this part. Yes insulating tape might be a good idea. It will be painted in satin black as close as original as possible.
Couple more pics of the strut brace bracket

and a few more titanium bolts for the cam covers

Very nice indeed Jim! Maybe i should have piped up about the electrloytic de-rusting sooner but it usually does its stuff overnight.

I recently came across an underbonnet shot of a later Legend 3.5 that had a strut brace fixed at the bulkhead as well as the suspension tops, very similar to what you've created. I don't know if it was OE or indeed if it would fit but the later bodyshell, although different on the outside, is still similar to its original Project XX/HX 800/Legend origins.

Got to say though, yours looks a lot nicer!

Thanks Dave, quite a few manufacturers fit them as standard so I guess they must be effective.
I searched for the Legend strut braces and found a couple, they looked after market but not sure.
There are some odd looking braces out there, for all cars, lots have a bend in them which I am sure makes it pretty useless, when cornering and braking the body probably only moves a small amount but the loads must be high and any bends in the bars will likely just absorb the body flex rather than keep in shape
http://www.rovervitesse.com
Top

Did the strut braces you found look anything like this Jim? Reading the listing suggests a one owner, probably older sort of person so little chance of it being modified. I get what you're saying about if it's bent then it can flex, if it's thick enough (wall thickness of the tube) and perhaps treated after then it will reduce the amount it flexes, despite the bends. Also note the placement of the bulkhead mounts in relation to the brace itself, minimising any flex again.

Did the strut braces you found look anything like this one? Not sure it would fit as it's been designed to accommodate the longtitudinal V6 (to facilitate AWD) but certainly gives a few ideas!

Yes that does look factory, guess the bends do not matter if done correctly. I watched a few strut brace test videos, some good some are just well youtube videos.
http://www.rovervitesse.com
Top

I suppose if any of the bends were flexing, a flitch/gusset piece could be welded into place to strengthen them but you don't really have any bends in yours.

Talking of welding, i must wake my pigeon up so it can poop on a few bits of metal for me - minor improvements to my manual tyre changer, nothing exciting!

Air filter housing is finished. I was able to modify the filter box side panel to fit around the much sharper angled filter intake pipe with some bending to the top and bottom edges. I had to make a new wider back panel though, it is shaped to the underside of the bonnet because I changed the design half way through and after spending hours making the templates decided I am using it despite a lid going over the filter.

and lastly fitted the MAC valve to the back panel

Still some small parts to paint and no doubt a few jobs I will discover when I try to drive the car for the first time in over 2 years but it is nearly there.
http://www.rovervitesse.com
Top

Looking good Jim! Not long to start up then?
Cheers,
Dave

Users browsing this forum: No registered users and 5 guests