5 posts [phpBB Debug] PHP Warning: in file [ROOT]/vendor/twig/twig/lib/Twig/Extension/Core.php on line 1266: count(): Parameter must be an array or an object that implements Countable
• Page 1 of 1

I'm new to the forum so thought i'd introduce myself. I've owned countless Rovers over the years from Metro's, R8's and R9's in most flavours, 600's but only had the one 800 over 15 years ago which was an early 92J 820SLi which had been abused, never ran right and had damp electrics and got swiftly binned.

I've always liked the 800's as they have an air of faded dignity about them, but had never really considered buying another until this one came along.

I own a 2001 Jaguar XJ8 3.2 sport so the need for another large car in the family seemed pointless, but a few months back whilst idly browsing ebay's car parts section (dangerous thing to do!) i came across a listing for a 94' 820SLi. The pictures were very poor and apart from the fact that it looked blue and was described as tidy, there was little else to go on. So naturally i was interested and fired off an email to the seller asking to come and view.

An hour train ride later i was greeted by this 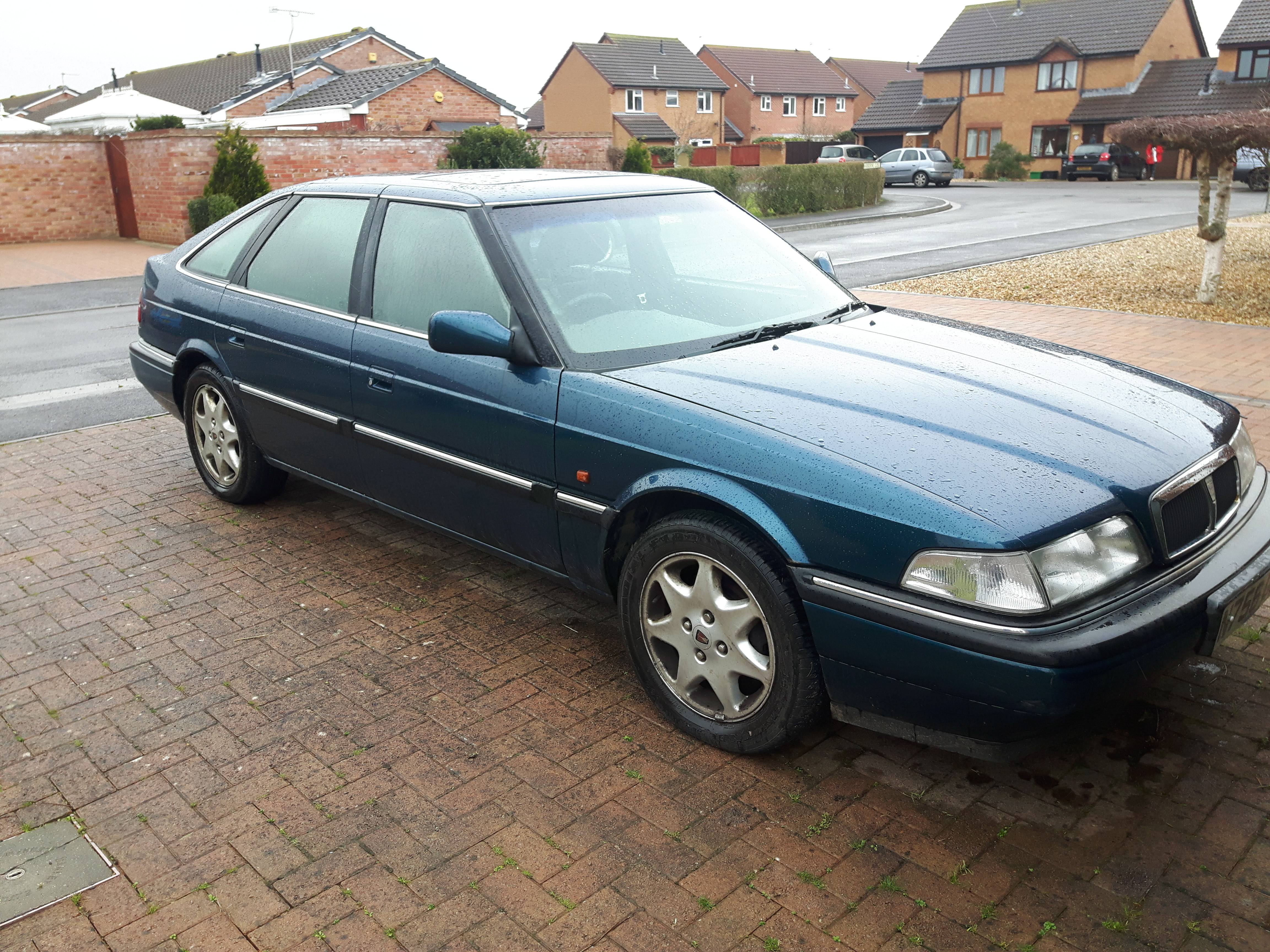 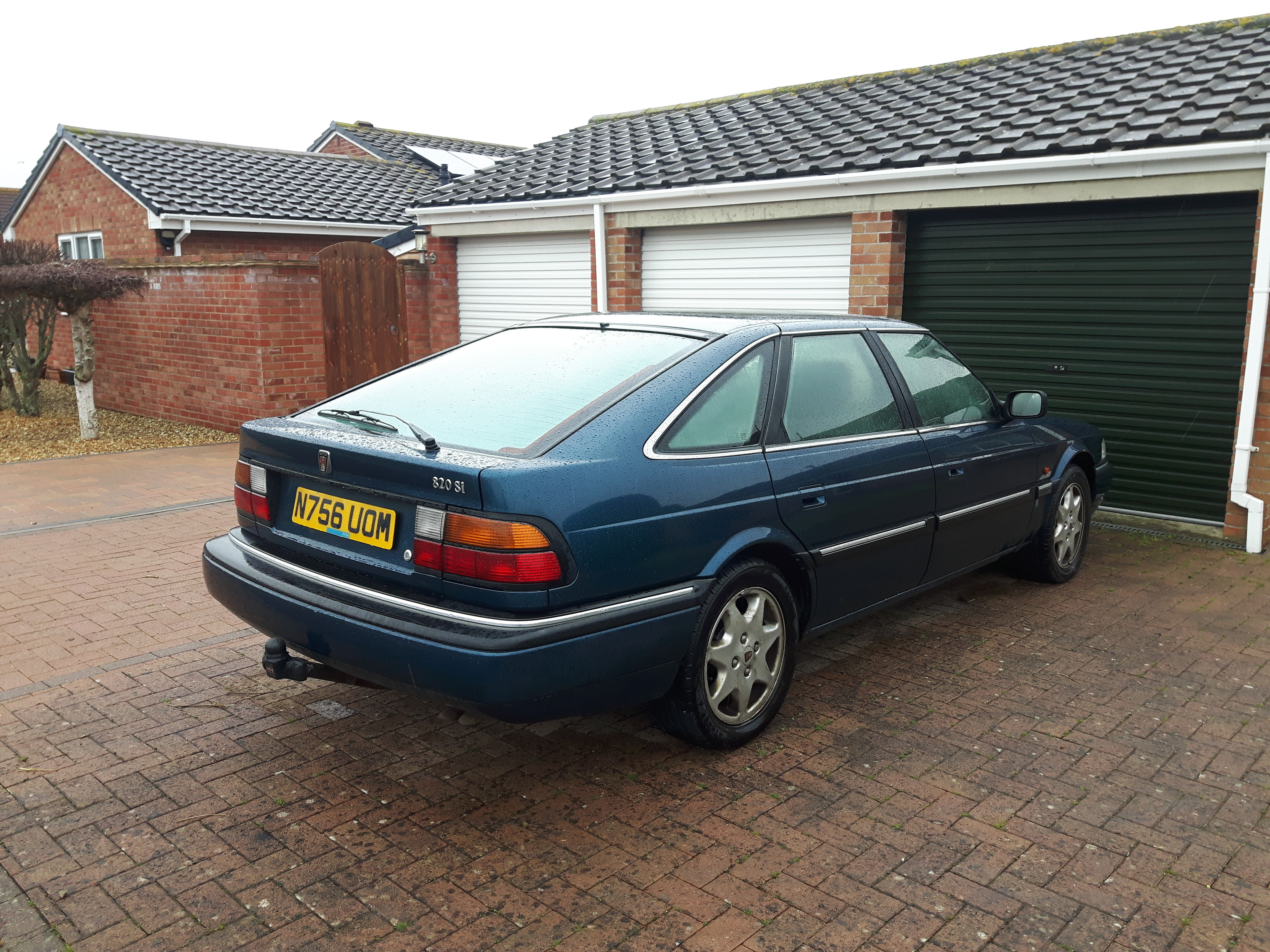 Its a 1994 820SLi (prefacelift) Auto with 54k on the clock. I was met by the deceased owners daughter and wife upon arriving. It turns out that her dad had been i'll for a while and wanted one last nice car before having to give up driving. He decided he wanted a Rover 800 and they found this one up north which they px'd his 2000 Honda Civic for!

It comes with pretty much every single receipt from new and looked to have been taken care of by previous owners.

Unfortunately he only got to drive it for about six months before passing away. It was then left unused on the drive for 8 months until i bought it. Brief test drive threw up no issues, so made an offer which was accepted and off i went.

Interior's a nice place to be 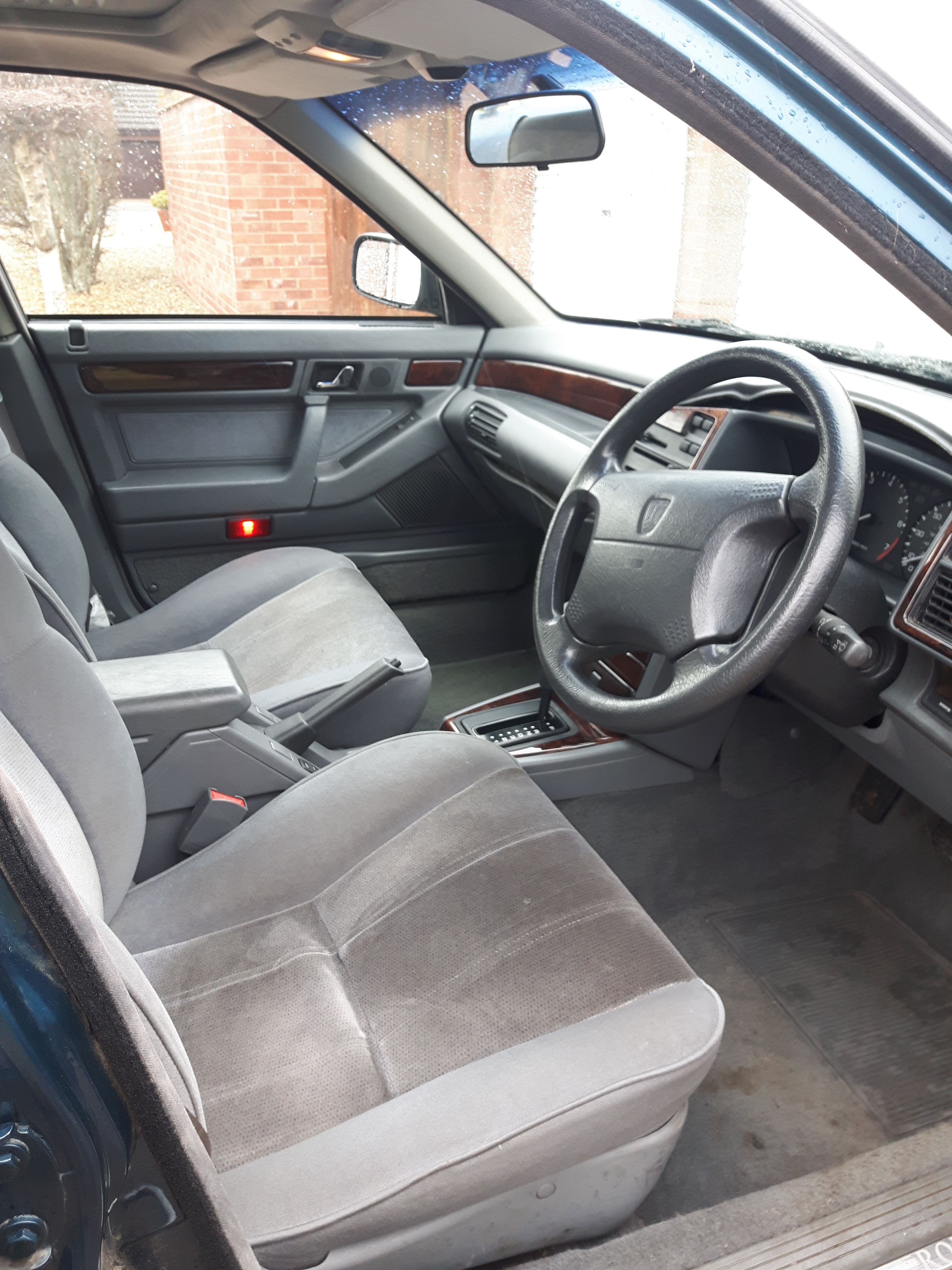 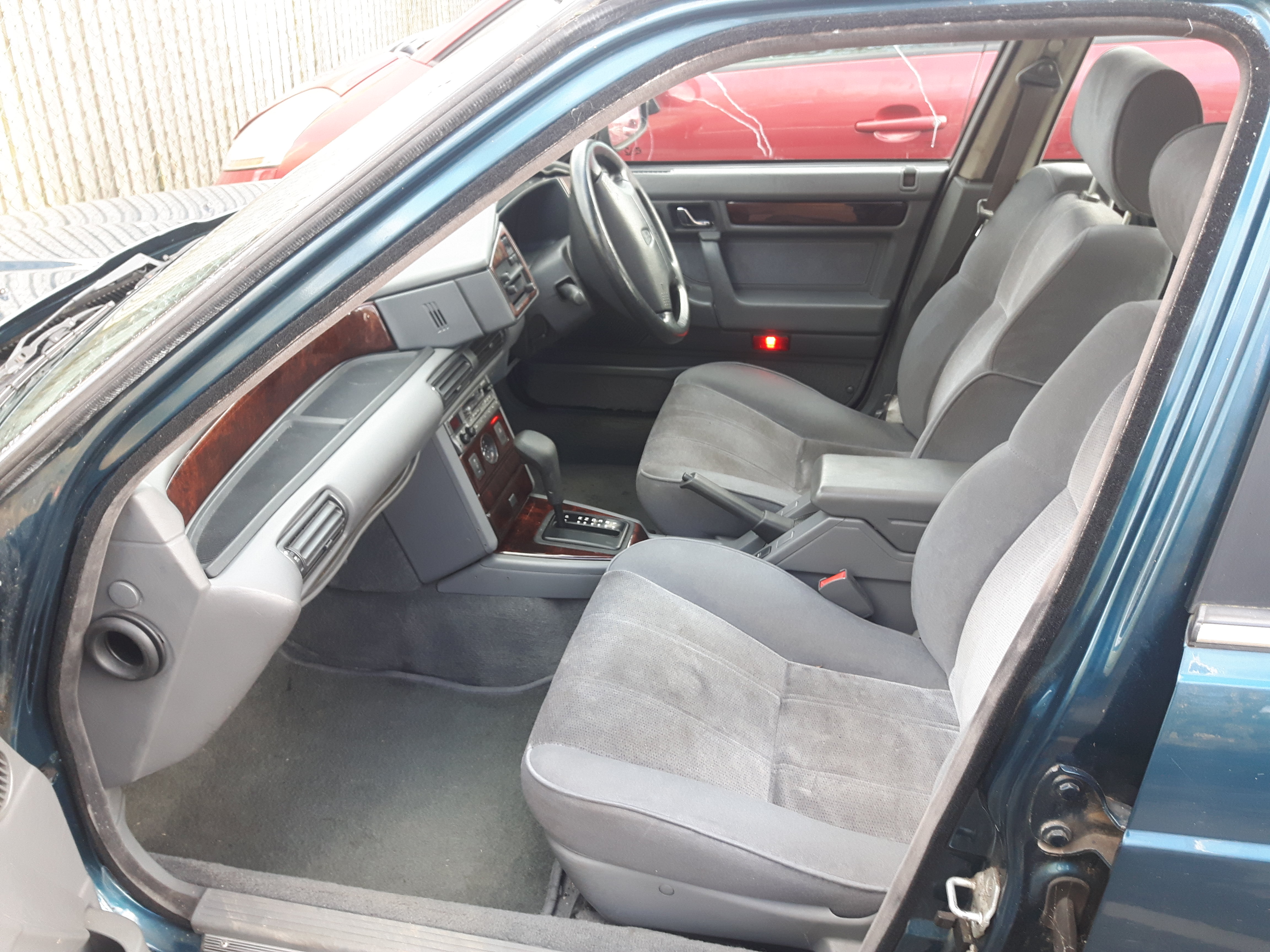 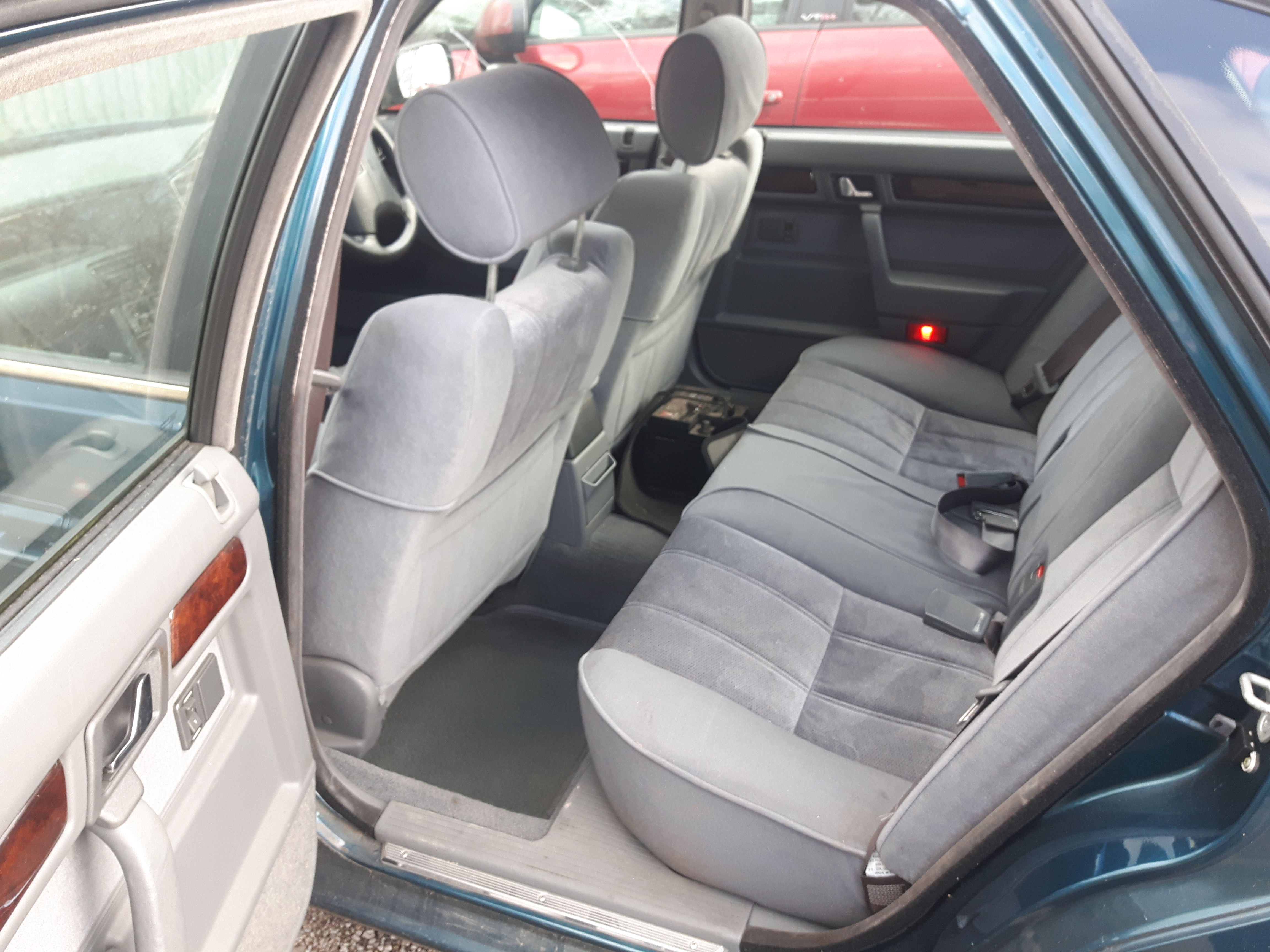 It has a few issues however 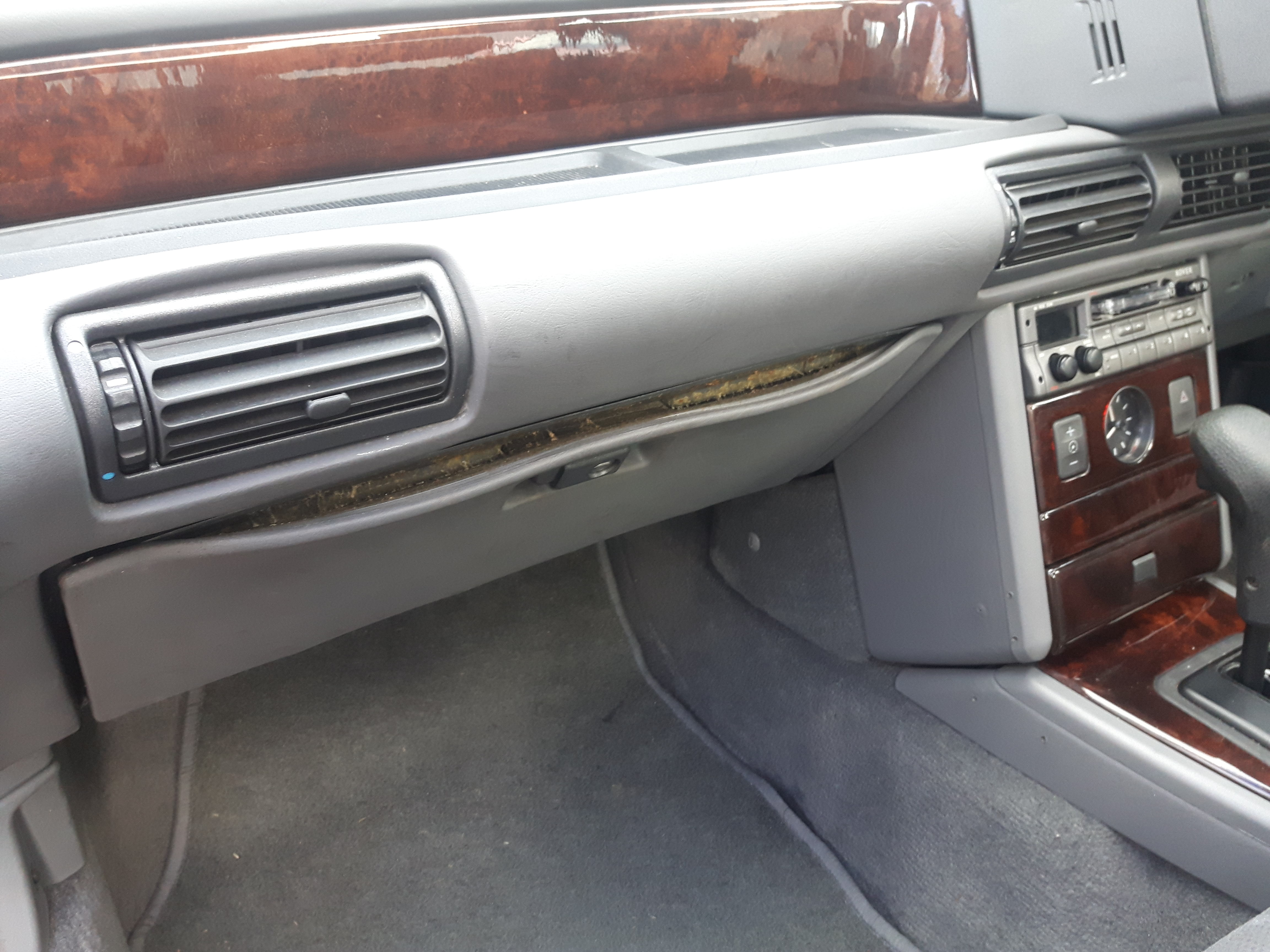 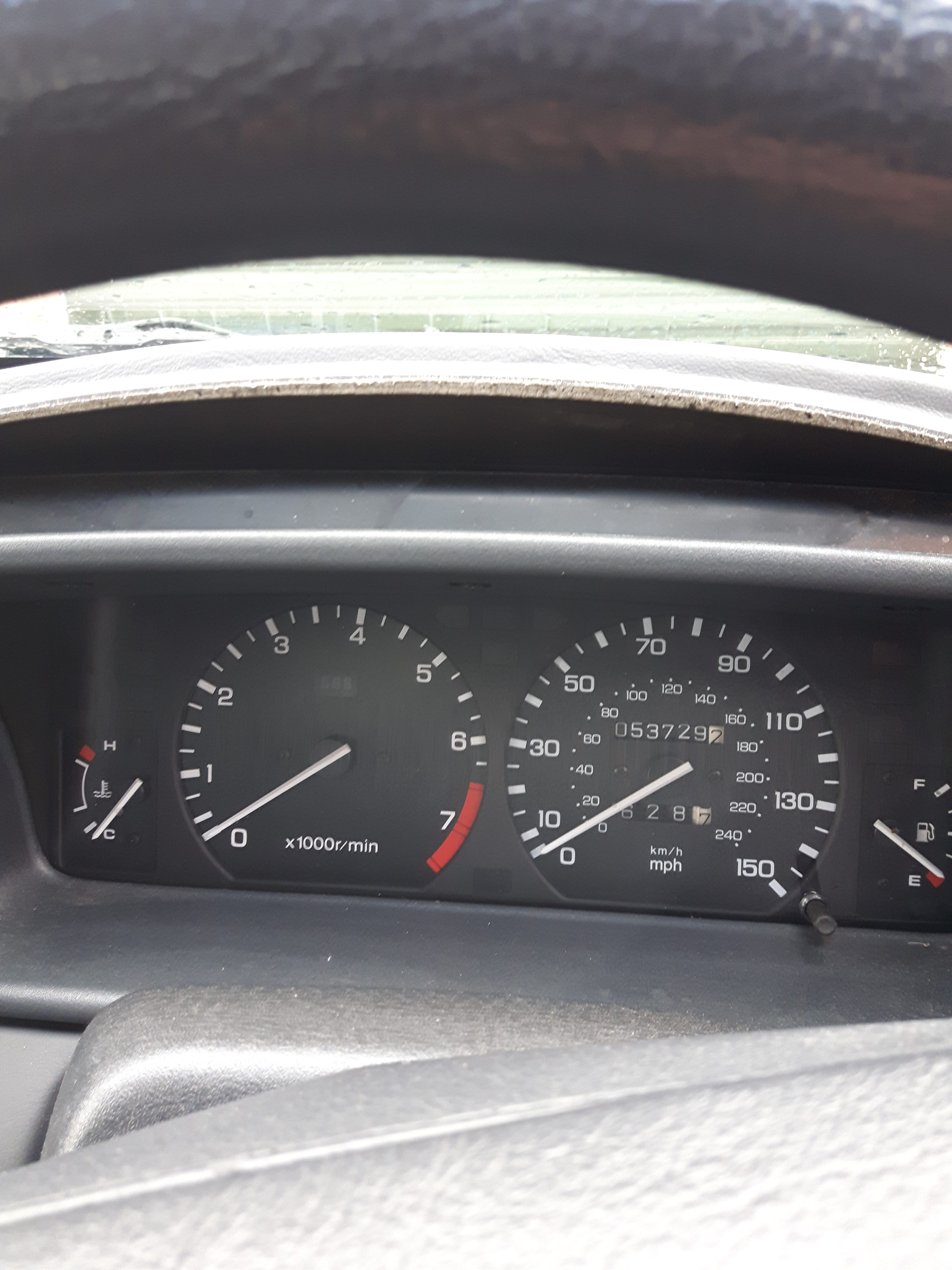 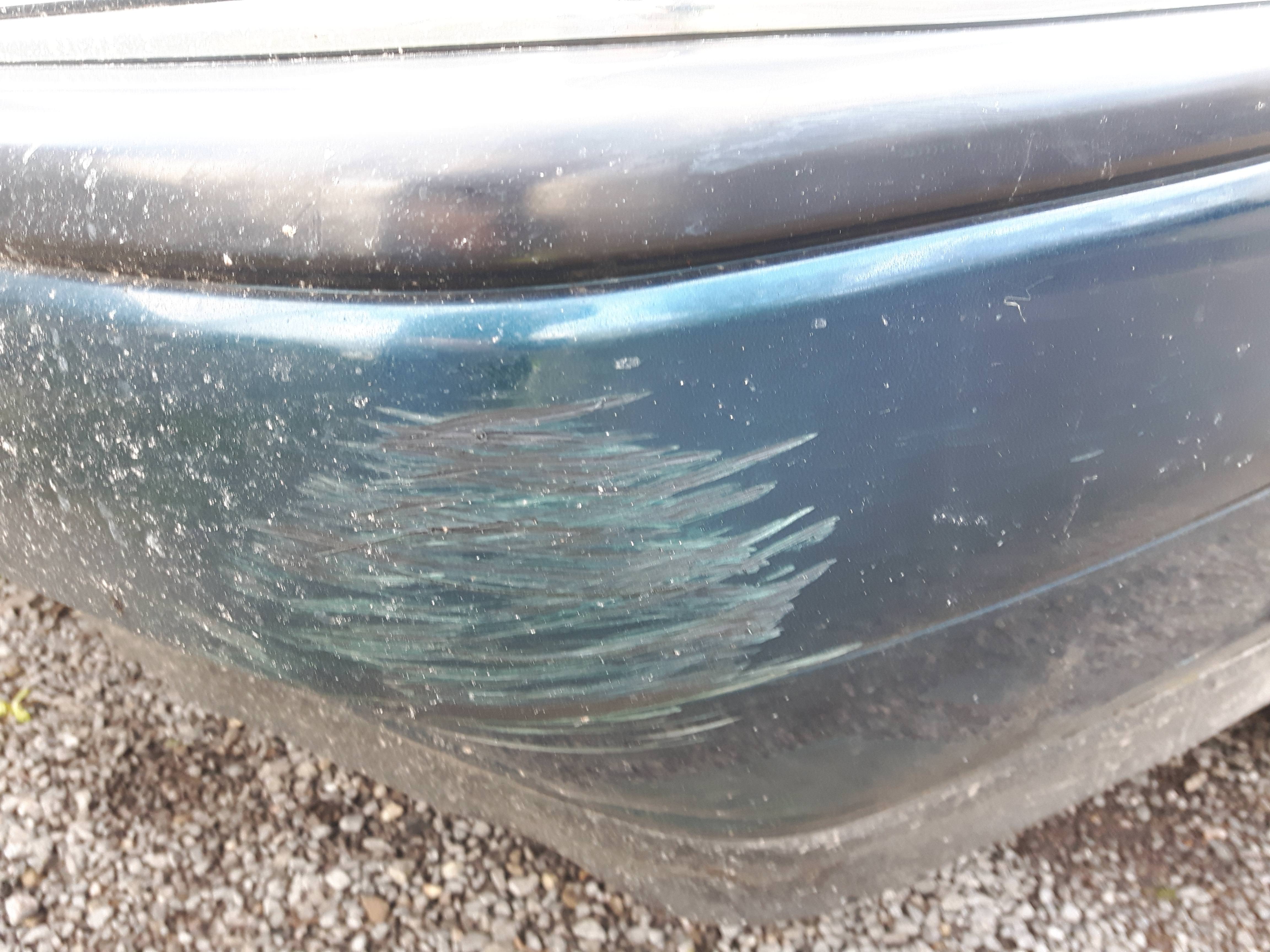 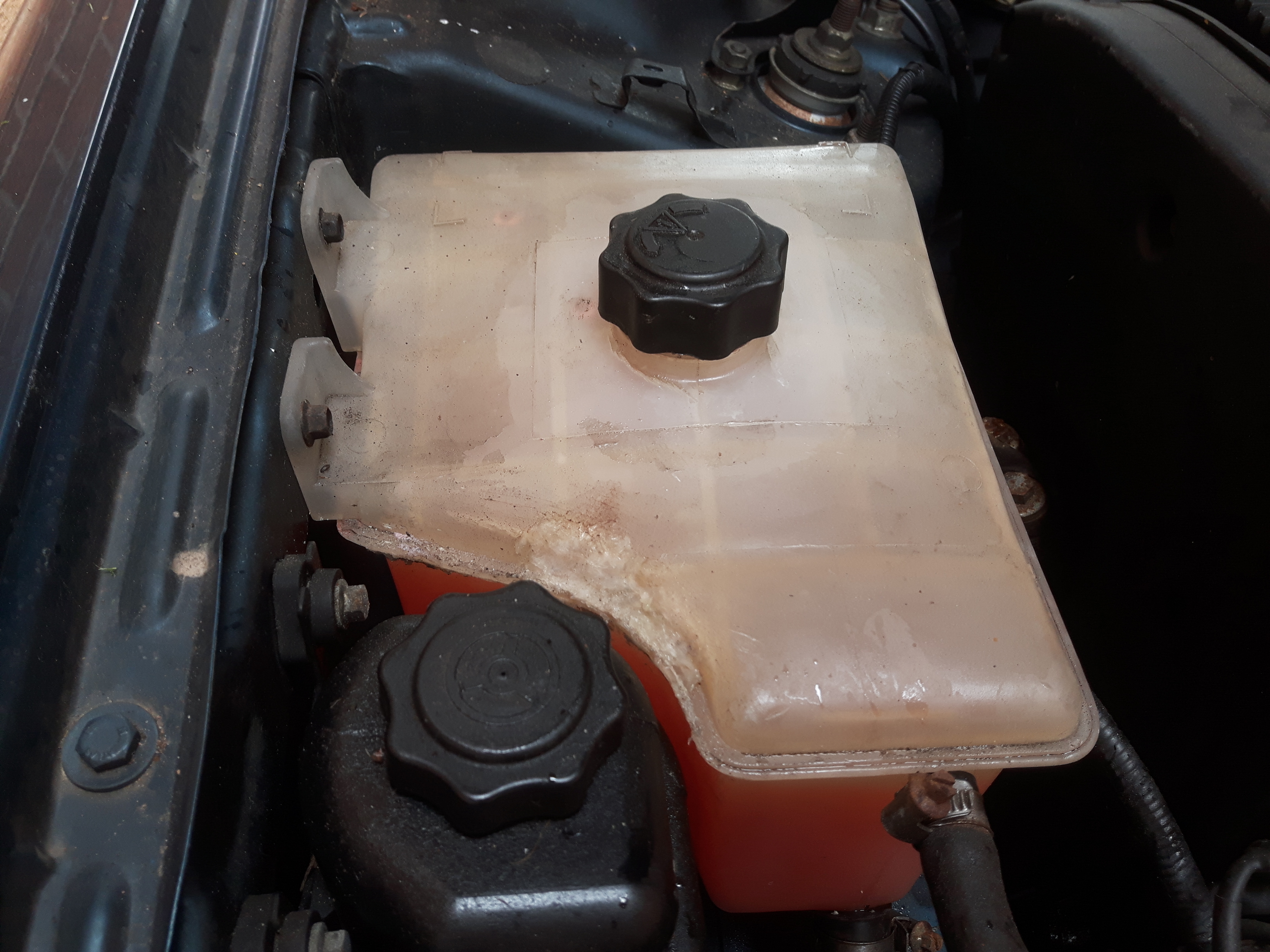 And its the last pic has caused a few issues.

On the 40 mile drive back home it seemed to get a bit noisy and lacking in power on gradients. Got back ok, but it smelt hot (didn't overheat)and under the bonnet i was greeted by this 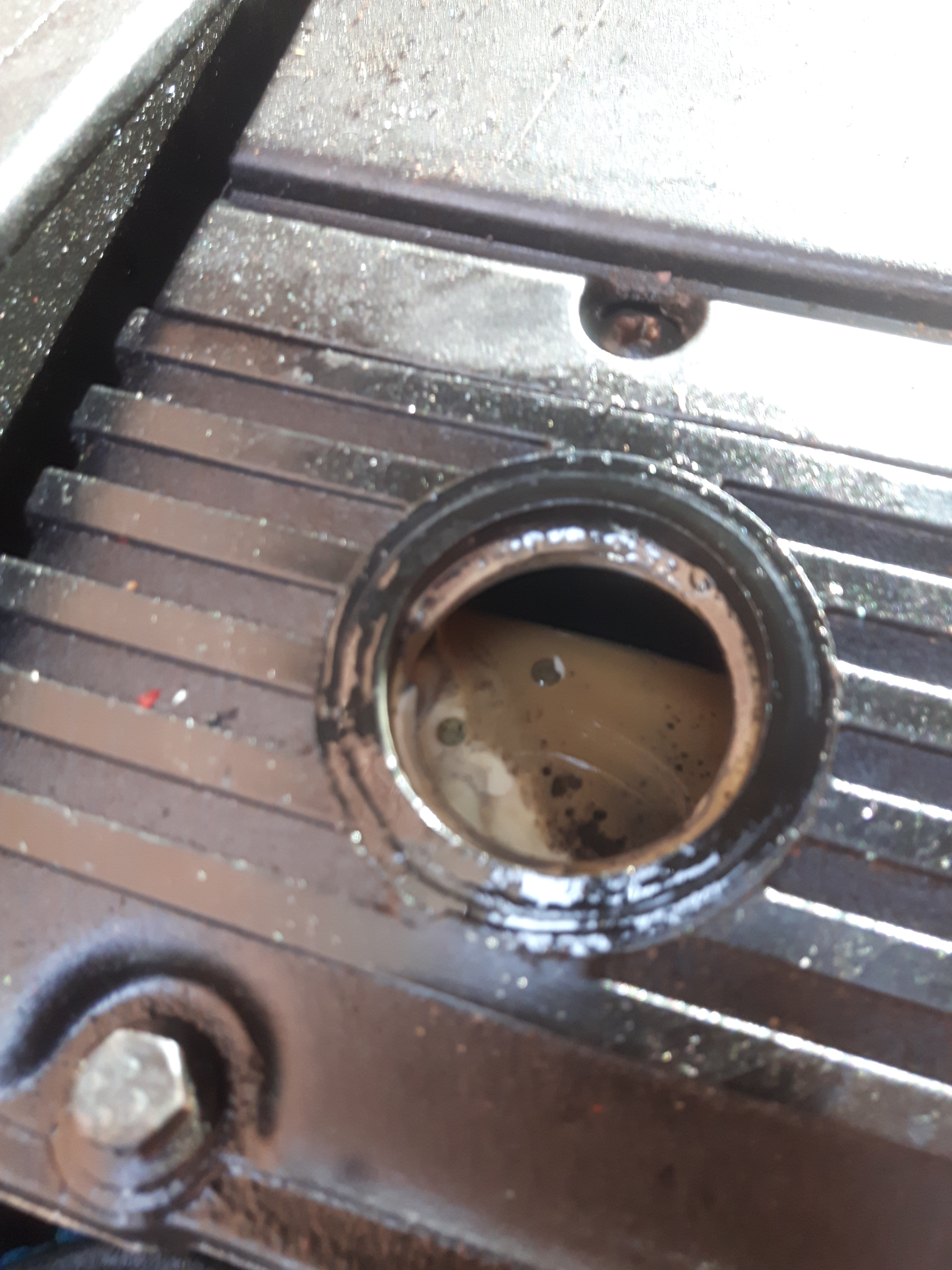 That would explain that then! Also a lotof steam was coming from the exhaust

Now i've got 3 choices, cut and run, pay the £500 for headgasket, or steelseal. I chose the 3rd option as i've had great and very long lasting results with this (and i'm a tight ass!)

Drained the expansion tank and put the steel seal in. Followed the recommendation and left it idling for an hour. then switched off. With that done i needed to flush the old contaminated oil out so bought a fluid extractor from screwfix (brilliant by the way) and set to work 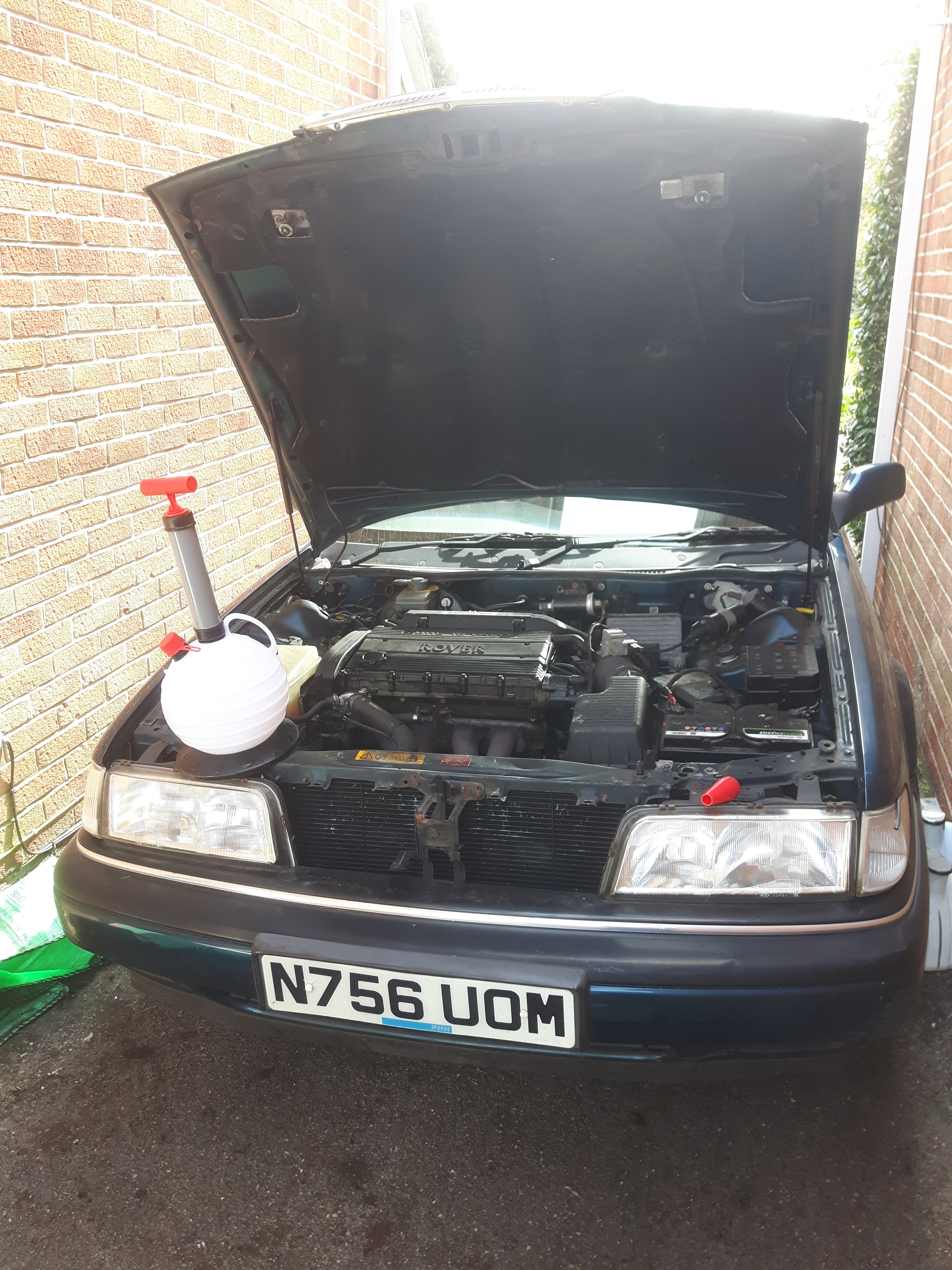 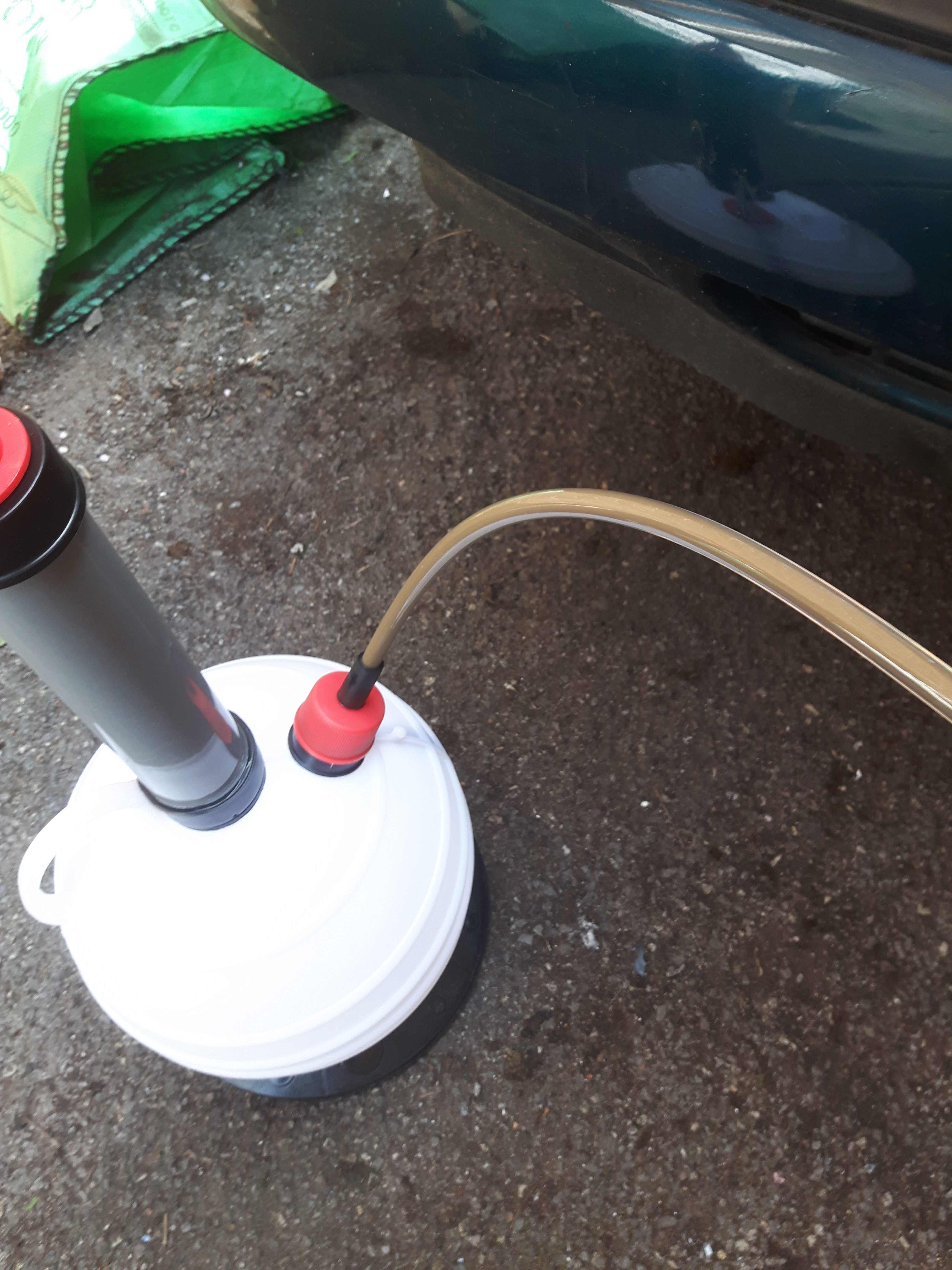 I found about 10 litres of old but unused Castrol Magnetic 10/40w diesel oil in the back of the garage which still looked like oil so in it went. The diesel oil has a detergent in it so i hoped it would flush all of the contaminated oil out.

I'm happy to report that i've covered over 150 miles since doing this and there is no further water loss, steaming exhaust or oil contamination.

I think the cat is toast as the lack of power remains and the only way of making any meaningful acceleration is to manually shift the gears as it feels like the engine is being strangled and there is a lot of back pressure. The cat was a cheapy that was fitted 5 years ago according to the history file and i'm pretty sure the failed headgasket has wrecked it.

I'm going to whip the exhaust off this weekend and have a look at the cat. If its knackered its going to have the guts smashed out of it. i'll worry about any mot failure next march when the mot is due.

The glovebox and dash are going to more of a tricky fix which i think very strong glue and u-clamps will be required!

Refit the 'stat and refill the system on plain water and run it like that for a few weeks. Then drain, remove 'stat and backflush again. Once you're happy that the water coming out is as clean as what's going in, drain the system down and add 5L of ethylene glycol (the blue or green stuff) then top up with water. Check the level daily before first use for the next week or so until it stabilises.

Second thing which you can do just before removing the cat this weekend is to check the cam timing. If the garage that filled the cooling system with OAT antifreeze without a strip/rebuild, meticulous clean inside and new gaskets are silly enough to use it in a pre-2000 car they may not have been clever enough to time the cams correctly. That would cause lack of power.

Third thing, when you remove the cat, chances are it will be blocked with all kinds from the HGF so will need a good clean out.

Get a window box planter tub or similar about 2' long and wide enough to fit the cat in it, add about half a dozen dishwasher tablets and boiling water, give it a stir to dissolve the tablets and drop the cat in. Agitate it every so often and let it soak at least overnight. It's a long weekend so you may be able to let it soak longer as in 2 nights.
Rinse it through in both directions with the garden hose and leave to dry/drain somewhere warm. If you have compressed air, blow it through to dry it internally.

As an option, once the outside is dry, give it a coat of VHT paint to protect it and refit then give it a road test. This has worked for me and many others to clean a cat internally for pennies. I did it to the one on my Coupé after the Lambda sensor failed during the emissions test part of the MoT - started off ok then started climbing until it got to over 9% at which point the tester pulled the probe.

While i was waiting for the new Lambda probes to land, i removed the cat and gave it this treatment. Comment from the MoT tester after (Well 0% CO but a strange lemony smell, like Fairy Liquid............"

By the way, you may well find the steam/coolant from the HGF has also caused the Lambda sensor to fail - even if it hasn't if the Lambda is over 10 years old or more than 100K miles it would be wise to change it as they get weak after either of those two points. That means increased fuel consumption, oil consumption, engine wear and so on. A £ 20 Lambda sensor is a lot cheaper than an engine rebuild!

Hi Dave, headgasket wasn't changed as i used steel seal which seems to have solved the issue.

Cambelt was changed at 32k but that was 7 years ago. I've checked the belt and it looks in good condtion but will need changing soon.

Lambda sensor looks quite new but its clearly a gsf et al part so won't be surprised if its failed. Interestingly, i unplugged it to see if it made any difference to the performance and it hasn't one little bit. Do the 800's have an engine management light? I would have thought unplugging the sensor would throw a fault code and put a light on but unplugging mine hasn't done this.

OAT will be removed asap and replaced with the correct fluid - good spot!
Top

I noticed you'd used SteelSeal to cure the HGF Steve, the OAT antifreeze has been known to eat head gaskets and other gaskets.

I can't remember off the top of my head the replacement interval for the timing belt on the T-Series but the thing i was referring to was if it's actually been timed correctly in the first place. It's not unknown for them to be a tooth out on one or other, sometimes both pulleys or half a tooth out on both which is in fact one tooth out on the crank pulley.
All of this can cause poor performance although in fairness, the 820 auto isn't noted for being a road burner - comfortable cruiser, yes but quick?
There is another possibility for lack-lustre performance and that would be the automatic transmission fluid (ATF) is past its sell-by date. Also if the Lambda sensor has failed that won't help but the MEMS engine management (no light on the 820s as far as i recall) is quite clever and resorts to preset values aka "Limp Mode" so performance is usually a little down and very thirsty.

On the whole it looks like you've got a good car there but will no doubt find various things that aren't quite right as you go through things. Once you've put them right it's easy to keep it right though!

5 posts [phpBB Debug] PHP Warning: in file [ROOT]/vendor/twig/twig/lib/Twig/Extension/Core.php on line 1266: count(): Parameter must be an array or an object that implements Countable
• Page 1 of 1