My new radiator has arrived for the 800 turbo. One slight problem is that it has a hole drilled in it for 1 sensor and the same kind of arrangement as yours! Do you know what bits i need to buy from rimmers to plug the hole? They do CDU1503 which is some kind of plug, not sure if i need the rubber grommet thing and a clip too?? 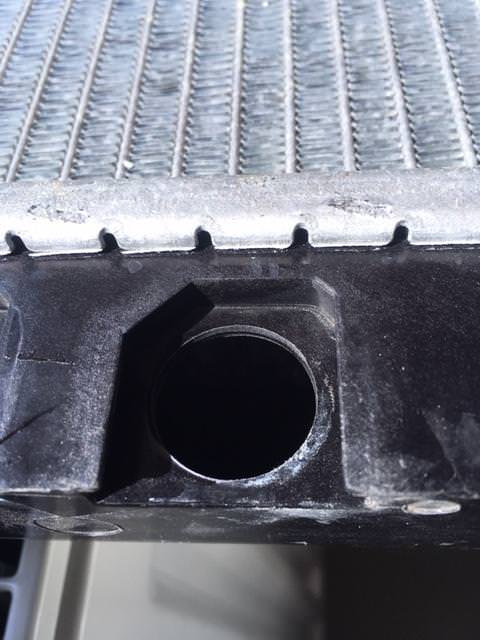 Is it just the one hole James?

If you, you need one grommet, one blank (or switch - more of that in a mo) and one retainer.

Those are the clip, plug and grommet.

The reason i mentioned the switch instead of the grommet is because the Mk2b Vitesse is notorious for not running the cooling fan. The way it works is the CTS tells MEMS how hot the engine is, MEMS then decides whether to run the fan or not. More often than not, it decides not to!

You may well be better off buying CDU1490SLP which is the bottom switch in the two-switch system and i believe is the lower of the two operating temperatures. Sadly it doesn't give the operating temperatures but it cross references to the only switch the Mk2a 2000 turbo uses so it's a fair bet it's the right one for the job.

You'll need a standard 4-pin, 30A relay as well, i can draw a diagram for you later if that helps but it might be a wise move to not order the CDU1503 plug but order the switch instead and just fit it from the off as it were.

Excellent, thanks very much. Parts including sensor purchased!
Top

It's about time for an update on here as well! I've had the DRL/indicator conversion for some time now with standard DRL/indicator bulbs but i finally managed to get hold of a pair of the "switchback" variety. These incorporate a delay in bringing the DRL on at first and switch the DRL off when the indicator is in use. I had a spare pair of indicators that i had modified and this time i didn't refit the polarised reflector that allows light from the bulb out but also works as a reflector.

Difficult to catch the delay but you can just see it in the shop window, very inconsiderate of that person to be stood in the way though!

That left me with a "spare" pair of bulbs, so what did i do with them? I thought it would be good to have LED indicator bulbs in the back and then this idea crossed my mind :

Now i should be able to see my victims as i reverse over them!

More to come as and when!

Great news James! If you need a diagram, just let me know!

Thanks Henrik! Err, not legal in Sweden to have DRLs??? The Swedes invented them!

Millions of Volvos and Saabs had them for decades before the rest of the world caught on the fact they're a great idea!

Millions of Volvos and Saabs had them for decades before the rest of the world caught on the fact they're a great idea!

DRL is not the same as our old "varselljus" - "guiding lights". Back in the days (70s) all of the Volvos and Saabs had the illuminated yet brighter parking lights, but the new variant is quite different. For instance an R800 has to have the headlights on, both front and tail, but a new Kia, Skoda etc only needs the silly LEDs in the front, and black in the rear.

Seems we're back to that "lost in translation" thing Henrik!

Here in the UK, Volvos and Saabs had Day Running Lights (DRLs) from the 70s onwards. The explanation of the fact that the parking light was lit with the 21W filament of a 21/5W (aka stop/tail bulb) bulb was that in the daytime, a 5W side/parking light would be difficult to see easily and at night would be brighter than normal sidelights/parking lights making the car more visible even if the driver forgot to switch the lights on.

Now, thanks to a law change in (i think) 201 which stated that any new car from 2011 must have LED DRLs means all cars designed from 2011 must have LED DRLs at the front at least - rear was optional.
I use the word designed because that is what i believe the law is - this is the "get out of jail free card" for dealers who have had stock sitting around for a year or two before registering them as new cars. It saved them having to retro-fit DRLs to the older cars.

From what you've just said, it would appear to me that the vehicle has to have "age-appropriate" daytime lighting in Sweden?

I know in the USA they had/have something similar and the 827s over there have slightly narrower headlamps with an extra, clear lamp, inserted between the headlamp and indicator as a "marker light" or DRL. However, some states insist that the inner headlamp main beams are illuminated as DRLs - not nice for traffic coming towards it! There are a few like that round here (i live more or less next door to the USAF base here) and they are a real pain in the retinas!

Well here we have a law saying headlights must be on at all time. In the 70s Volvo and Saab got around this by using the 21/5w bulbs just as you say. Most other manufacturers had automatic head lights when sold here. A few years ago, probably the same all over EU the DRLs came and those cars were excluded from the law as the rear lights are off. (Illegal in older cars)

I believe it is possible to modify to the new standard but it’s not legally simple as the car needs to be registered with the alteration. So for me it means I have to turn the lights on when I drive.

It sounds like a potential minefield of pitfalls just using the lights the car came with Henrik!

Something i have noticed since adding my DRLs is that other cars seem to notice the fact i'm there a lot more, especially on dual carriageways/motorways. Also the indicators are brighter with a better light spread and give that "instant on/off".

Now the only lights that aren't LED on the car are the front and rear fog lights. The rears are easy to upgrade, not so sure on the fronts.
Cheers,
Dave

I really like leds especially in the brakelight and turning signals just for the reason you mention Dave, they are more ”on and off”.

Manalishi wrote: ↑
Wed Aug 08, 2018 1:05 pm
I really like leds especially in the brakelight and turning signals just for the reason you mention Dave, they are more ”on and off”.

Apparently they researched on Peoples reaction time and as the brake lights lit up faster, there is less risk of being hit from the rear!

There are lots of reasons i like LEDs Henrik and that is one of the main reasons, the fact they are "instant-on" so people see them that fraction of a second earlier which gives them those precious extra feet/metres of braking time.
Also the fact they consume much less power, don't give out so much heat (if any) as the filament bulb counterparts, more reliable and with the technology they have now, a whole myriad of colours is available, all at the same brightness level unlike filament bulbs using a filter to get different colours where a lot of the light output is lost because it only lets through the component of the light that is the same colour as the filter.

On a serious note, I say that because the first thing I did when I got my ZT was remove the slightly 'bling' metal V6 badges that someone had placed under the repeaters on each wing and it took a fair amount of elbow grease and T-Cut to get rid of both the residue and the 'shadow' left on the paint. Worth bearing in mind if you're thinking of tidying it up - do it sooner rather than later
Adrian
1998 Rover Mk2 820 Vitesse Hatchback (white gold)
Gone...1998 Rover Mk2 820 Vitesse Hatchback (green)
Gone...1992 Rover Mk1 827 SLi Manual (green)
Gone...1998 Rover Mk2 825 Diesel (green)
Top

The biggest problem with LED lights is when the design of the lighting unit depends on refraction. For example, my rear indicators are long, with the bulb sitting towards the top of the unit. Using LEDs, the bottom half of the lens remains unlit, leaving a large shadow. Revert back to a halogen bulb and it's lit from top to bottom.
Adrian
1998 Rover Mk2 820 Vitesse Hatchback (white gold)
Gone...1998 Rover Mk2 820 Vitesse Hatchback (green)
Gone...1992 Rover Mk1 827 SLi Manual (green)
Gone...1998 Rover Mk2 825 Diesel (green)
Top
Post Reply [phpBB Debug] PHP Warning: in file [ROOT]/vendor/twig/twig/lib/Twig/Extension/Core.php on line 1266: count(): Parameter must be an array or an object that implements Countable

Users browsing this forum: No registered users and 8 guests