On the grounds the inlet and exhaust manifolds will have to come off, i'd go for a head set Adrian, simply because it's usually cheaper to buy them all together in one set.
Likewise with the set from Rimmers that includes the extra gaskets and baffle - last thing you want is an oil leak or similar from skimping on a few quid for gaskets.

Check that ebay sellers others listings too, very often they have complete head sets with bolts for a good combined price - have used them before and no complaints!

Was this head ever pressure tested and skimmed?

Honest answer is that I don't know.

However, when it comes off (next week - fingers crossed) I guess we'll be seeing what's needed.

I took the head off as it was the easiest way to access the core plugs at the back of the head and as it had that oil leak from the front nearside corner. I replaced it with a klinger gasket. I didn’t have it skimmed as it hadn’t over heated and wasn’t leaking compression or water. Fingers crossed the head is still ok.
Top

The garage managed to diagnose the fault - the power-steering pump failed, in that the 'key' that engages with the back of the waterpump had actually separated from the shaft, so it was no longer being rotated by the pump, and thus no longer driving the water pump either. End result, no circulating water, and HGF.

The head was warped and the gasket had apparently gone between cylinders 2 and 3. The head's been away to the engineering shop for a skim and has now been refitted.

Trouble is, there are no (reasonably priced) powersteering pumps listed available for the late 820 Vitesse anywhere. But some very helpful forum members have revealed that 25 2.0 diesel p/s pumps fit if you switch the feed pipe over. So I've got one of those on order, and am hopeful (optimistic, even) that it might be up and running come the end of next week.

Seems we were both right to a point that it was water pump related causing the HGF, both a curse and a blessing the head has been skimmed! It'll have a bit more poke but you'll need to be careful the injectors are running as they should. Might pay to have them cleaned/refurbed while the car is in bits :

Granted it pushes the price up by £72 (+P&P maybe - not sure) but it gives you a nice, clean set of injectors which will help both economy and performance and remove any risk of one or mroe cylinders running lean which can kill one of these engines.

I've got a lot of updates to give, but in the meantime I've got an urgent question.

Post HG replacement (and everything else), it's almost impossible to start without disconnecting the plug at the end of the injector rail (underneath the bundle of vacuum pipes). Now, presumably that's power/sensor to the injectors? What could be causing this?

It also runs extremely lumpily/unhappily with it virtually stalling (although does seem relatively happy when actually driving and pulls well).

Urgent, because I'm either taking the car away to drive it 200 miles (which i won't do if someone says "the timing is out and you shouldn't drive it more than 30 seconds round the corner") or leaving it here for more £££££.

Hmmmm, 'tis a puzzle Adrian! When you say impossible to start, do you mean from cold? Or both hot and cold?

Have you checked all the vacuum hoses are back where they should be including the one on the fuel pressure regulator (FPR)?

Also have you tried opening the throttle at all while trying to start?

It might be worth doing a stepper motor reset if it hasn't already been done, i'm suspecting over-fuelling as (i'm not sure that is the injector wiring but basing my theory on the assumption it is) it would appear that when you remove the fuel, it will start then you have to either stop it again or reconnect that plug to get it to start.

Might be worth checking the timing but it shouldn't be a pig to start when it's just come back from being repaired, especially if it wasn't before!
Cheers,
Dave

Timing's out innit? One tooth?

It was always hard to start when hot - I suspected CTS, but even after changing with one from Best of British, no improvement (pre HGF).

After the HG replacement, they noted it was very hard to start (reported to me as when warm). After a compression check, it was down on two cylinders - not lots, maybe 30-40psi compared with the other two. Garage reckoned it was possibly down to piston rings (so I got properly miserable about the fate of this engine) going during the HGF. I said it was always tougher to start when warm and they said, well maybe it's not too bad.

I'd say more like 2 teeth retarded on the inlet cam!

The exhaust cam is slightly past the horizontal in your pic if you look closely. Take that into account and it looks more like two teeth.

That's assuming they've got the bottom end right as well! 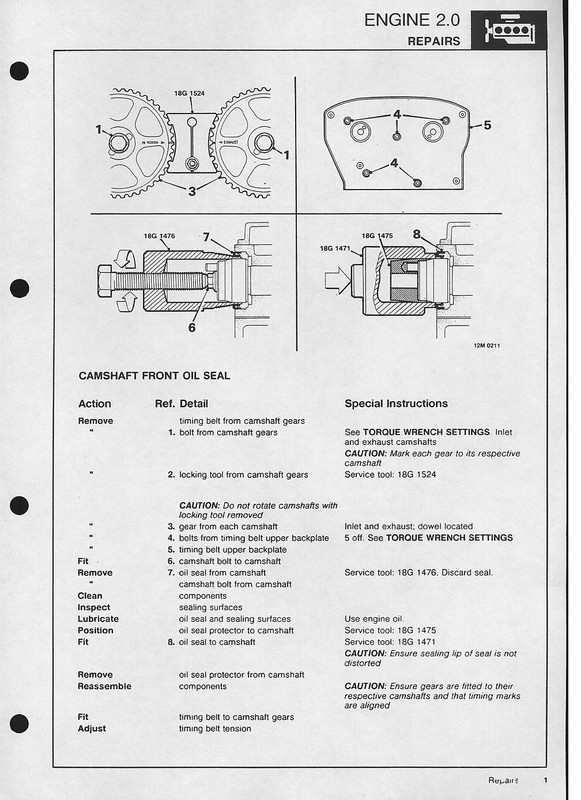 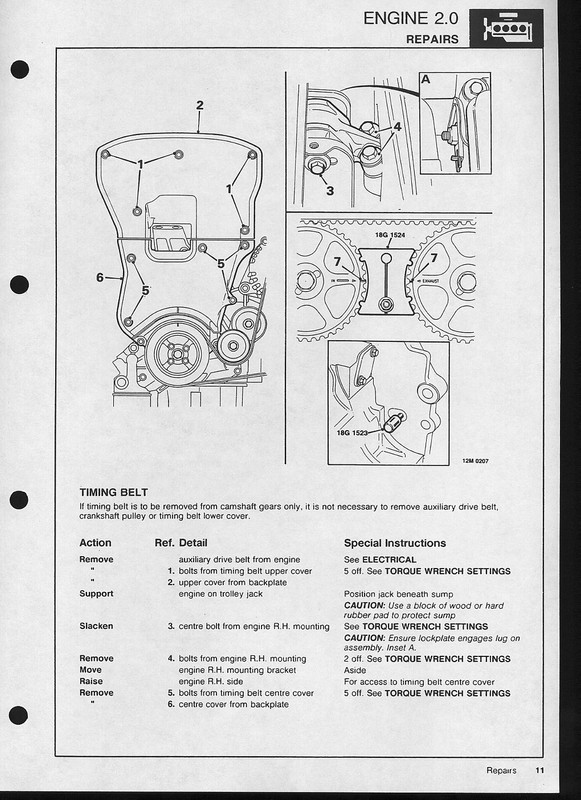 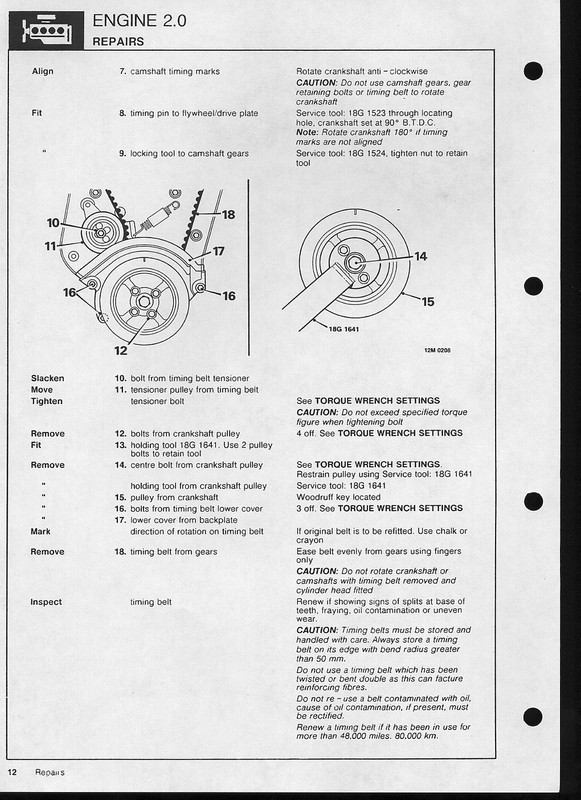 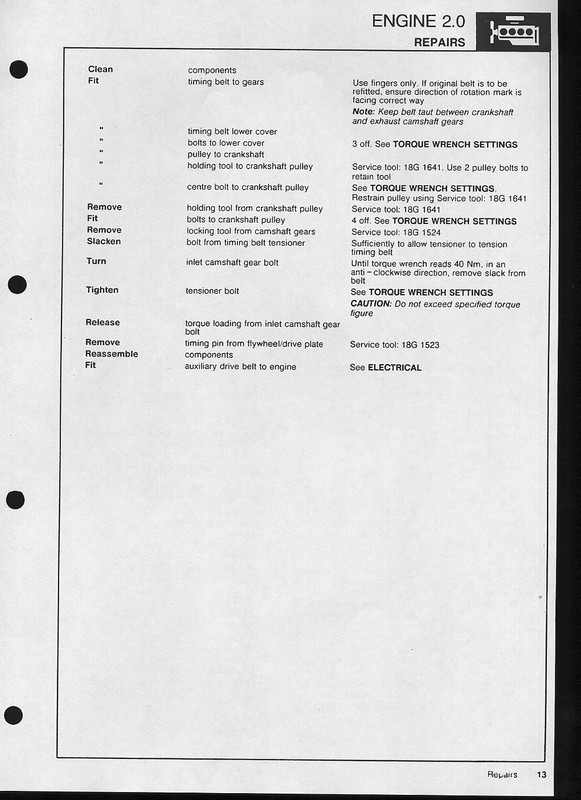 Note the T series is timed at 90 deg BTDC using a dowel pin (or M8 bolt if memory serves correctly) in the back of the flywheel through the engine backplate (between the block and bellhousing) so it's anybodys guess whether they even used that method to start with.

Either way, they need to sort it and if any engine damage has resulted (eg bent valves etc) then THEY have to put it right, it wasn't your mistake but theirs.

As a general thing, it's amazing how many so-called trainde mechanics have managed to do this in recent years to my knowledge and presumably have done it in the past as i've had a few cars that were difficult to start and sluggish compared to similar models i've had and usually the cam timing was amiss. My last Volvo had allegedly had the head gasket replaced by a Volvo specialist shortly before i got it, the timing kept wandering because the timing belt was extremely loose and even once tightened, it turned out to be a tooth out as well! Only a single cam so the effect was magnified and i daresay the turbo on yours masks some of the lack of grunt.

Good luck getting it sorted, fingers crossed there's no other damage as a result!

Thanks Dave - currently wondering if I'm relieved or not, to be honest. It explains the compression findings, plus its dreadful running (although not the previous hot-start problems). I wish I'd kept my mouth shut about the hot-start issue, because if I had, they'd have gone back and likely diagnosed the timing themselves.

Anyway, at 8.30 tomorrow I'll be back round the garage for a friendly discussion about how quickly a garage can re-time a T series! They are great, and have really looked after me - mistakes happen, it's all about how they are rectified.

The previous hot-start problems could well have been down to the failing water pump etc that caused the HGF in the first place Adrian. It would have allowed the engine to have got hotter than it's meant to and caused a vapuor lock in the fuel line so the garage can't take any comfort from that. When they found the compression was down, they should have investigated further and would (or at least should!) have found the mis-timed cam etc then.

As long as they put it right, quickly and there's no other engine damage as a result, it shouldn't really be a problem.
Cheers,
Dave

Users browsing this forum: No registered users and 13 guests