Instead of hijacking other peoples' threads with what I've done to my cars (sorry), I thought it's about time for my own thread. Whilst most of what I do is not as spectacular as some on here it still might provide ideas.

I'll continue with something that I have recently mentioned in Manalishis' thread, namely that I broke my 'Sixth Light Finisher', aka rear quarter-light removing it to get to the leaking window. Using the method I have mentioned elsewhere (another hijack), I have fixed it. So this is what it started off as (well, it started off unbroken...);

The first thing was to restore some form of integrity which I did by using a two part epoxy glue; 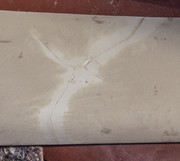 I scraped off the excess to give what you see above. It was then re-enforced on the inside with a layer of fibreglass with a sheet of perforated corrugated metal stuck on top, followed by another layer of fibreglass. I'll apologise now for the rough finish as it went off quicker than I would've liked. 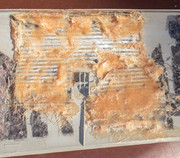 I also managed to break two tabs on removal; 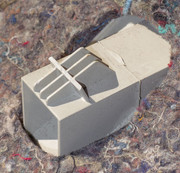 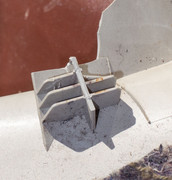 which were the two end ones of the fastback roof slope. Then, to add insult to injury, I broke a third tab, the middle one trying to get the metal clip off

I made a template of the tabs using 1mm thick plastic card (two will be used for each tab); 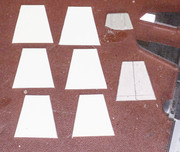 and there are a couple dimensions which are common to all. First, the width at the top is 16mm and two, the top of the tab is 11mm above the shoulders. The angle of spread of the tab is also constant, so the base of the tab where it hits the main part of the moulding will vary on overall height.

Channels were cut in the shoulders leaving a small element of the original tab; 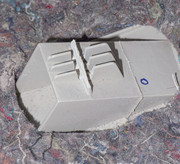 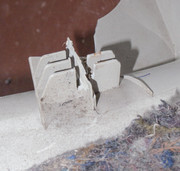 On to which the new tabs with fillets were stuck with two part epoxy;

The wonder product called 'Milliput' was liberally applied to tie the new tabs into the moulding, paying particular attention to the middle tab area where there was an actual hole; 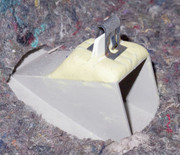 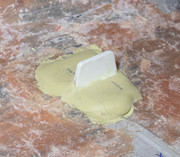 The tabs were sanded, shaped and metal clips replaced. I applied body filler (more precisely, Gelcoat filler) to the face of the finisher and sanded that smooth; 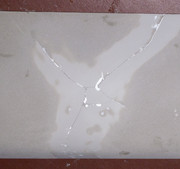 There are no open cracks, the darker lines are full of epoxy, so when I apply a covering it will be even and un-noticeable.

So I'm now back to a point where I would've been if the piece had come off without breaking and it only took a day!

Somebody please explain to me how to get the pictures into the main body of text without having to click on them.
Last edited by Fastback on Tue Apr 28, 2020 6:21 pm, edited 1 time in total.
Mark
'96 820 Vitesse Lux Fastback, rolling resto
'99 825 Sterling Fastback, up and running

Managed to ge the other side out today without breaking it all!

I applied some 'Plusgas formula a' to the window bolts, left it to soak and cracked those. They may only be plastic nuts but I did manage to shear a bolt on the Vitesse. So all nice and ready for sealing when my Butyl strip arrives.
Mark
'96 820 Vitesse Lux Fastback, rolling resto
'99 825 Sterling Fastback, up and running


Somebody please explain to me how to get the pictures into the main body of text without having to click on them. 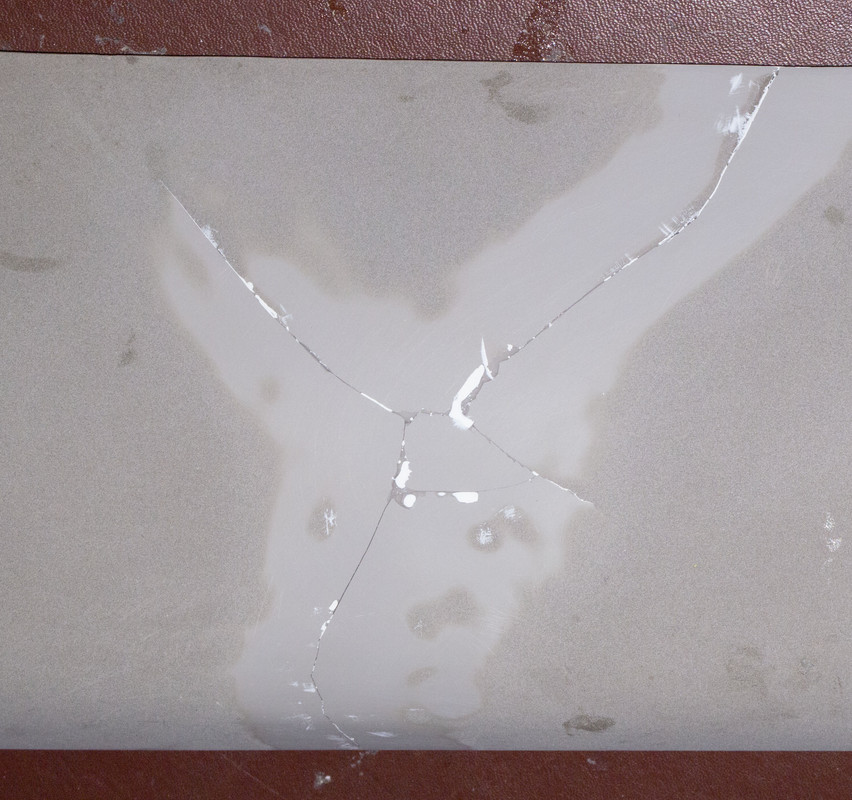 Use the "Hotlink for forums" link for the pics Mark!

Surprised you didn't use Milliput to repair the finishers, i used it on the instrument surround panel on my Volvo to great effect and also the underdash trims where the mounting holes had shattered so the trims were flapping in the breeze.

Reckon it'll be a fix for the map pockets on the doors too......

Now you have an intact 6th light finisher, are you going to take a digital scan of it and 3-D print some?
Cheers,
Dave

You're right, I could have used Milliput to finish but I think bodyfiller responds better to 'wet 'n' dry'. Not sure about that though, so perhaps an experiment is in order.

Sadly my 3D printer only goes up to about 10" cubed, but surely it is going to be the way forward. A bit like the free forming of body panels being developed by Toyota.

Time for me to be really stupid; where or what is a 'Hotlink to forums'.

The Milliput Extra-Fine responds nicely to wet'n'dry and is almost smooth enough to start with.

At the moment, you're using "Thumblink for forums" in the links on postimage aren't you?

The "Hotlink for forums" should be the next one down in the list.

This gets worse! I have not seen the things of which you speak. All I have is 'Add image to post' at the bottom of the text box or the insert image icon at the top. I'm working on a PC if that makes any difference.
Mark
'96 820 Vitesse Lux Fastback, rolling resto
'99 825 Sterling Fastback, up and running

Fastback wrote: ↑
Mon Apr 27, 2020 8:50 pm
This gets worse! I have not seen the things of which you speak. All I have is 'Add image to post' at the bottom of the text box or the insert image icon at the top. I'm working on a PC if that makes any difference.

Ah, that explains a few things! That's how the forum is set up to upload photos. If you go to https://postimages.org/ and register for a free account and upload your pictures there, when you click the share icon above each picture, it presents you with a list of codes.

At the end of the line of each code is a blue button, click that for the code you need (Hotlink for forums) and it changes to "Copied" and the blue "Close" button at the bottom of the list becomes active so click that to return to your album.

Normally i have postimages open in one tab and the thread i'm adding to on another tab. Where you want the picture to appear in your post, right-click and thenclick "Paste".

I normally hit the return key twice after each to give a single, empty line between each pic or following text.

It's actually a lot easier than it sounds and saves the forum server space as well because your photos are hosted externally. It's also handy if you post pictures on more than one forum, especially the same pictures.

Ah! Thanks Dave. I maybe not quite so stupid then. But probably am

More a case of us talking at crossed-purposes Mark. Now we're talking about the same thing it should all become clear soon enough!

That is an excellent repair! I got my 6th light finisher out with a slight twist as it came out from behind the headlining trim. It didn't go back that way!

It's a different kind of clip on the headlining trim, one that really, REALLY only wants to go in and never come out. That said I got one out; bent the metal work, ie the roof, in doing so. I think there are four overall and then pins in the hatch opening. I assume it was a case of slide in then push up. Defintely only a one way fix. I won't be proceeding to get any others out and I need to find something to stick the trim back.

I've got a four way stretch vinyl that I now will be applying to all the trims and I'll post later on that.
Mark
'96 820 Vitesse Lux Fastback, rolling resto
'99 825 Sterling Fastback, up and running

I've got a four way stretch vinyl that I now will be applying to all the trims and I'll post later on that.

That sounds interesting stuff Mark, have you got any links to it?
Cheers,
Dave

Yes. Martrim unfortunately doesn't do any other colour than black but AS:trim do

I was previously unaware of this company and they seem to do some unique products as well as the normal stuff. Actually spoke to them, gave some useful info and delivered quickly.
Mark
'96 820 Vitesse Lux Fastback, rolling resto
'99 825 Sterling Fastback, up and running

Previous:- 'J' 820Si Fastback, part Tickford
MG Maestro 2.0i (I loved that car, I did)
Top
Post Reply [phpBB Debug] PHP Warning: in file [ROOT]/vendor/twig/twig/lib/Twig/Extension/Core.php on line 1266: count(): Parameter must be an array or an object that implements Countable

Users browsing this forum: No registered users and 14 guests