I've been busy over the few days leak chasing and interior refurbishing. Did my roof liner today for the Sterling, here it was before;

Showing very much the worse for mould growth whilst it stood full off water from a few months of none use and a poor winscreen replacement where whoever did it, did not prep properly and caught the front of the liner in the windscreen mastic. Still, as I'm quietly confident that I have got the front leak (more on that later), I have done the liner ready for reassembly. This is it now,

Vastly improved, not that hard to do and not expensive. Well worth it!
Mark
'96 820 Vitesse Lux Fastback, rolling resto
'99 825 Sterling Fastback, up and running

Very nice Mark! BTW, i haven't forgotten your question about the window switch LEDs, been unexpectedly busy the past few days! As soon as i get a few minutes i'll sort that out for you.
Cheers,
Dave

Following on from Dollysprint's and others suggestions, I further investigated the area around the air intake. I took the wing off 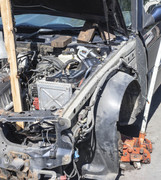 and doused the area with water and after seeing something like this,

wondered what the heck was going on? It is possible to see the darker area where the fluid has found a way in (picture taken with my arm shoved up from the footwell and air intake chamber from below. The plastic grommet is the one that sits just above the chamber when viewed from outside). The indentation is this,

but as you can see there is nothing on the outside. Now I don't know fully how these cars are put together but I took the bonnet hinge off,

Looking at the areas of corrosion, is it reasonable to summise that water is getting in here, ie under the hinge and if you look into the threads, there are definitely multiple layers? I lathered the area with my 'Seak 'n' Seal' (Captain Tolley type liquid), both down the threads and along the more obvious seam there and sure enough it got through. The wiring loom grommets under the wing looked fine but that's no excuse for not piling the goo in there as well

Now this might be an aside to the problem as I think the main culprit is a breach of the air in-take chamber upstand to the bodywork. Water was definitely seeping underneath but how the heck do you fix it? Even getting 'Seak 'n' Seal' is tricky. 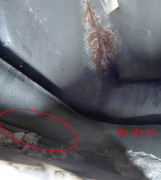 Above you can see the join of the two components (ringed). With the wing off and using washer tubing I was able to get fluid to the seam from the side and going through the upper aperture, to the back. Hoping that stops ingress from the outside, I then applied sealing mastic to the join on the inside. Awkward as again, hand up inside the blower chamber, navigating the support struts there,

What is also interesting in this image is A, the rust on the bar in the lower right. That, I think, is the 'recirculation' pivot of the aircon. Clearly corroded and strong suggestion of water ingress here,; and B is the rust blob in the middle of the picture. It is just below the windscreen, with nothing obvious on the outside. I have greased it but that's it

All I need now is some rain to test as I'm leaving the fluid to fully work its way in. I won't go into the work I did on the wing whilst it was off, but it wasn't a moment too soon due to a poorly aligned wheel arch liner and normal wheel arch corrosion. All in all, hopefully a good day

Some good investigative work there Mark! Hopefully you've found the source of your leak now.

If nt, at least you've found some other bits that needed attention as well.

I couldn't say how concerning surface rust should be - if the inside of the car has been damp for a while, I'd expect some surfaces to pick up some flashing. I had a worry because the steering column support bar had a coating of rust, but in the end it was just surface rust and not terminal corrosion.

Thought I would pre-empt the rain and stress test the area with a watering can yesterday. Bearing in mind that previously a couple of kettles of water produced the signs, a couple of cans over a longer duration and it's looking fine. Going to repeat today as I have to be sure before re-assembling the interior. Also need to check the windscreen as it's been sealed with tape after I think I got the ingress there.
Took the opportunity to fix the 'dash lift' in the glove box area as well, so that's all nice and tight fitting again.


Looks like you've done a pretty thorough job on the dismantling!

You could say that!

Fingers crossed for you Mark!

I've had another busy day! Still feeling pretty sure that I have found, and stopped, the leak I can move onto re-assembly. The Sterling has been more or less in that state since October last year

. Still fully taxed, insured and MOT'd as of course it's on the road. My rear cushion, foam, mat thing that goes on the floor pan was looking sorry for itself;

Not as bad some, I believe and fortunately the foam is in serviceable condition. I had already bought a roll of rubber liner ready to do this job but with no idea if it would work or not. I was going to lay it straight over the top but since what was there was unstable, didn't seem much point. So all the old rubber top coat was removed and I started wrestling with a length of my new stuff.

Cut well oversized and worked in. What surprised me was that this new liner is not very strong at all; easy to rip, hole and damage generally. Using brush-on high temperature adhesive, we got there.

Not perfect but not bad. Once the mat is glued to the foam it changes how the matting performs, so a lot happier about it now. So that's where I'm up to for now and we might be due for some rain, which I'm pleased about as it will test the leakage before I get any further.
Mark
'96 820 Vitesse Lux Fastback, rolling resto
'99 825 Sterling Fastback, up and running

Good work there Mark, should find it's a lot quieter too!

Reducing noise is certainly one of the aims. It is really one of the weaknesses of the 800, particularly the fastback. But weight has got to be considered as well. The fastback Sterling 825 auto I think was the heaviest incarnation of the series and it still only comes in at 1485kg. If I shoved another 500kg of insulation in there (BMW 5 e39 weight) then of course it would be quieter.
Mark
'96 820 Vitesse Lux Fastback, rolling resto
'99 825 Sterling Fastback, up and running

Given the density of the sound insulation, if you stuffed 500kg of soundproofing in there, you'd never get in!

Users browsing this forum: No registered users and 13 guests