Hi, just wanted to introduce myself, my name is James and I am a bit of an MG / Rover fan! At the moment I have a 1991 mk1 Sterling which quite an interesting history. I also have a ZS 180 and during my 16 year driving career I've owned 10 MG / Rovers!

***Apologies in advance, I seem to have written a novel on my car! Please feel free to stop reading here!***

My Sterling was bought by my late Grandfather in 1992 from a Rover auction for Â£9500 (quite a bargain!), He flew in Sterlings in the war and was actually shot down over Arnhem but with the aid of the Dutch resistance managed to escape back to allied lines. He was looking for a new car and when he saw the 'Sterling' knew he had to have it. To this day I still have his 'RAF Escaping Society' sticker in the window.

Sadly a couple of years after he bought it he suffered a heart attack which he survived but because of his health he could only drive very occasionally so the Sterling spent most of its life in his garage, and being a bit of a car nut himself he even kept it covered with blankets to 'stop the spiders crapping on it'!. The car was last used in about 2002 and sadly a couple of years later he passed away.
For the next few years the car just sat in the garage until on one visit my Grandmother asked if I could arrange for it to be removed as it was upsetting her it being there. Not having had an MOT or even been started for almost 4 years it looked like it was going to be a case of getting a breaker to collect it but my Rover addict instinct cut in and decided to have a go at getting the old girl going.

The brakes were seized on so there was no chance of pushing it out of the garage so I decided to have a go at jump starting it. I checked the levels which were all good, pulled my other car round, hooked up the leads and turned the key not expecting much but to my shock it started first time! I managed to get it out of the garage with heavy use of my right foot and checked it over. It looked good so I decided that being 300 miles from home the best way to find out what needed doing was to book it in for an MOT.
The drive to the station was interesting, my wife reported that just about every possible colour of smoke came out of the exhaust but it got there so I left it with them and went off to do a bit of shopping in Bath. A couple of hours later I got a call from the garage to say that 'my car was ready to be picked up'. Bemused I asked what it needed to pass the test to which I was told it had passed! I asked them to do a service anyway and picked it up.
For the next few days I just pottered around in it locally to make sure it was really OK before the big drive home. The thought of driving 300 miles in a car that had been laid up for so long was a bit nerve racking but it went without a hitch.
Thankfully its been as reliable ever since, when I took it over it had 51,000 miles on the clock, it now has 88,000 and so far all that's failed is the alternator! It has a couple of little issues like the door seals have become a bit hard so the wind noise is worse then it should be and last month the lens fell off the front indicator because the plastic has become brittle but other then that I can honestly say its the most reliable car I have ever owned. In fact in 2008 we drove it down to the south of France and then on to Barcelona and in a couple of months we are doing the same again!

Anyway below are a few pics, she's in pretty good condition for a 19 year old car.

On the beach in North Norfolk 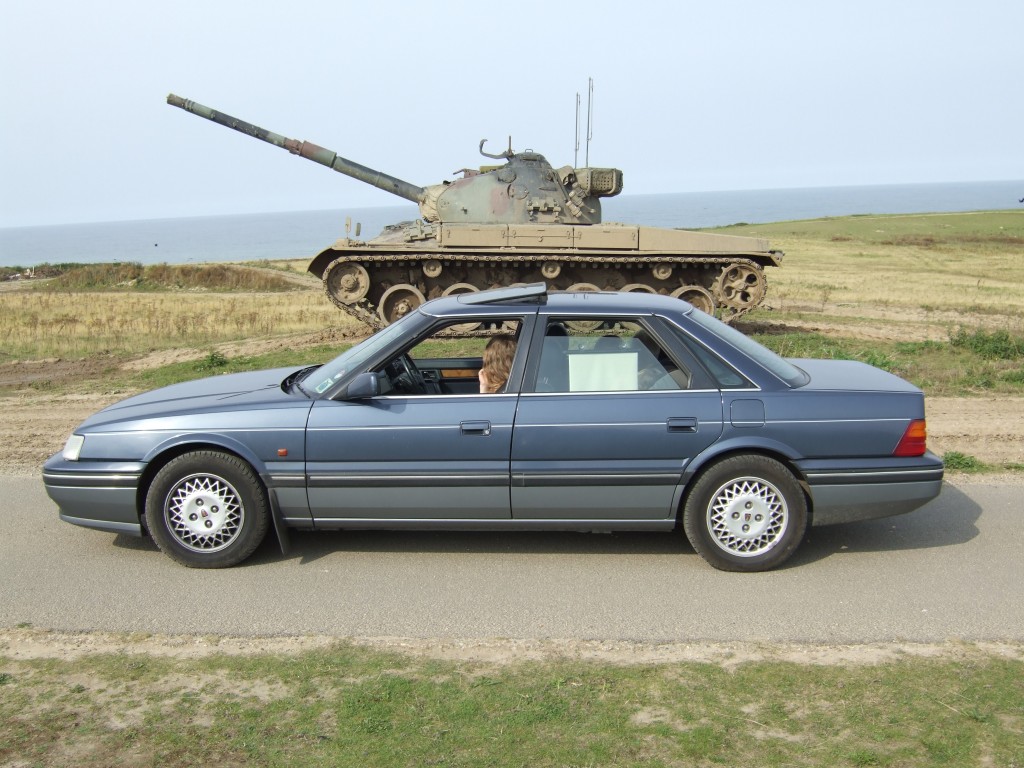 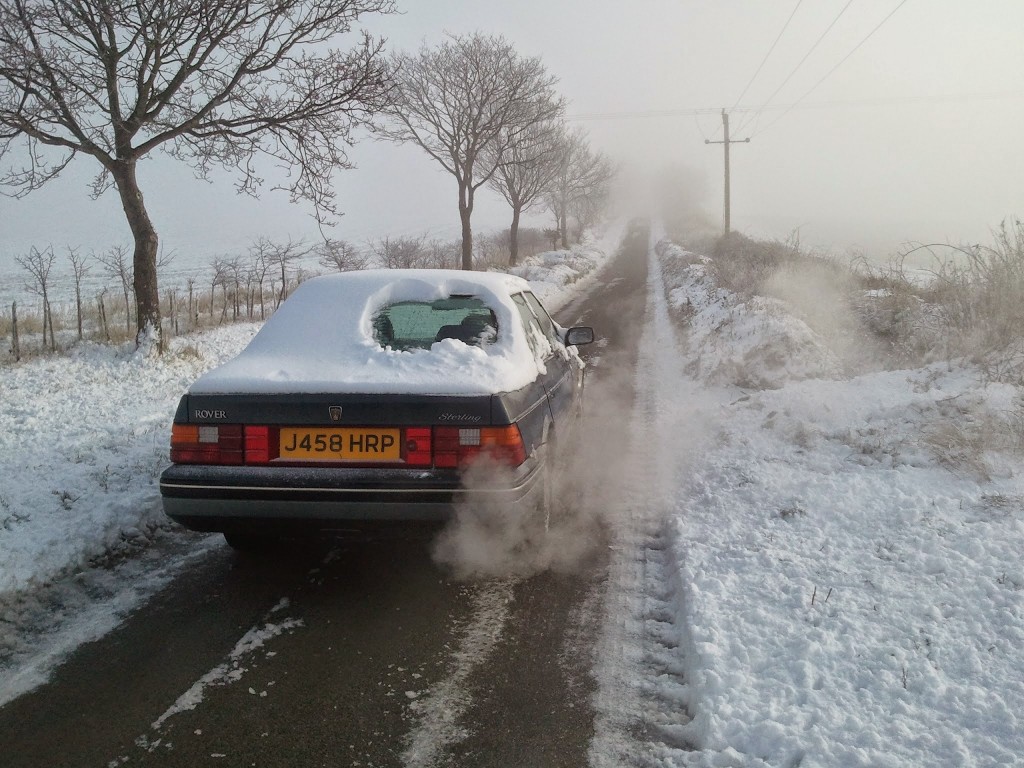 Nice stoy too. Amazed it passed with brakes like that, and smoking!!! Or had it cleared by then.
Phil B
95 827 Stirling: Nightfire Saloon.
96 Coupé 827 Manual White Gold.
97 Coupé 820 Vitesse Gunmetal.
99 820 Vitesse Nightfire Fastback. SERIOUS amount of welding done. Lived in a fettid garage for years.
EX 1994 Saloon Rover 827 SLi White Gold- RIP.
Top

The smoke had cleared by the time I made it to the MOT station, but I did take the long route to get there. The brakes were not too bad once they had a bit of use however when we got back to Norfolk I treated her to new discs and pads and a full set of new tyres as the old ones were far from round!
Top

Your car, which is amongst the last of the Mark 1 cars to be sold, is the same as one in my collection. Coincidentally, I bought that one from Norwich. Here it is:

And it also has a sticker for continental travel in the same place as yours...strangely similar...

That is a nice story, i am glad you are enjoying the car.
Rover Vitesse Coupe - 1997
Top

burnsy566
Newbie
Posts: 30
Joined: Sat Jan 31, 2009 9:40 am
Location: Aberdare
[phpBB Debug] PHP Warning: in file [ROOT]/vendor/twig/twig/lib/Twig/Extension/Core.php on line 1266: count(): Parameter must be an array or an object that implements Countable

That's a lovely looking car, in a great colour!
Top

Very Tall Brad wrote:Your car, which is amongst the last of the Mark 1 cars to be sold, is the same as one in my collection. Coincidentally, I bought that one from Norwich. Here it is:

And it also has a sticker for continental travel in the same place as yours...strangely similar...

Spooky! Yours also looks in pretty good condition. For ages I wished that mine had been a mk2 as they look a lot more 'modern' but now I'm very glad its a mk1 and actually prefer the shape to the 2's now.
Top

Very nice car and a nice story too! Well done on taking it in!

What a fantastic looking car, and certainly a very interesting story behind it. The mk1s are my most favourite of Rovers. I think your Grandad would be most proud of you for keeping his pride and joy going.

Welcome to the site by the way.

The game will NEVER be over, because we're keeping the dream alive.....

Great story and nice looking car, would be very hard to part with now I bet.
Mk2 Vitesse Fastback

Slamm wrote:Great story and nice looking car, would be very hard to part with now I bet.

I think that the only way I'll be parted from it now is if something bad happens to one of us! I suspect that at some point it will start to become expensive but I'll still keep it on the road.

I've had 2 people come up to me, one in the Asda car park and another in a petrol station asking about the car and whether I was interested in selling it.....then answer is always NO!

Oddly the only cars that I've been asked about at random are the Sterling and my RV8!
Top
Post Reply [phpBB Debug] PHP Warning: in file [ROOT]/vendor/twig/twig/lib/Twig/Extension/Core.php on line 1266: count(): Parameter must be an array or an object that implements Countable

Users browsing this forum: No registered users and 12 guests